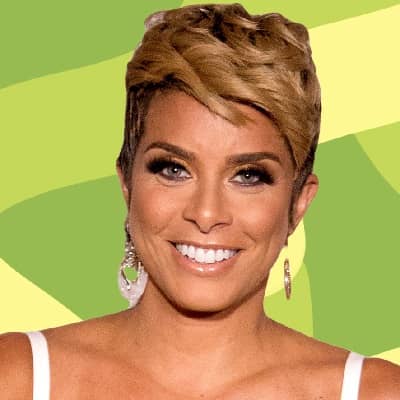 Juan is a star athlete and a professional basketball player. Robyn met Juan Dixon while they were in high school. They became high school sweethearts and also attended college together. Eventually, the couple married in July 2005 and settled in Maryland.

They also have two talented, athletic sons. Corey was born in 2008 and likely Carter born in 2010. However, it was said that Juan cheated on her and the couple decided to split in 2012.

But after some time of separation, they rekindled their love and renewed their commitment to each other. Again, the couple got engaged in December of 2019 at their holiday party. They are planning to get married again.

Who is Robyn Dixon?

Robyn Dixon is an American reality television personality, publicist, entrepreneur, and event manager. She is also an actress who is known for Wolf Creek 2 in 2013, Never Fall in Love in 2017.

Furthermore, she is popular for being the official cast member of Bravotv’s Real Housewives of Potomac.

Robyn was born on March 31, 1979, in Baltimore, Maryland, the United States  She was raised in Baltimore by her parents. Her ancestry is of Afro-American origin.

Her father’s name is Guydoc Bragg who is a Retired Dentist and a Musician. Likely, her mother Gladys Bragg is a business owner. She is also a former college professor with an MBA from an Ivy League school.

She graduated from the University of Maryland. She has her degree in business marketing.

Robyn came into the limelight after being cast on  The Real Housewives of Potomac Reality Show.

Talking about her professional life, Robyn works in the public relations field and in an entrepreneur fashion. She manages her event management business. Recently, she has established her new fashion accessory business, Embellished. It sells various Chic Satin Lined Fashion Caps, T-shirts, and different Hoodie collections.

Furthermore, Robyn is also a philanthropist and is involved in various charitable endeavors. They are mostly focused on benefiting women, children, and families. She distributes her time between her real estate investing business, and her family.

The star has a net worth of around $3 million. Additionally, she also has her company and also earns from it. She must be having a good lifestyle.

Robyn was into heated discussions with her co-stars about her racial identity while on the show. She said that she was accused of being “racially obsessed” on RHOP, and she also revealed that people have told her she’s “not black enough” since she was at school.

Robyn also was part of controversies after living with his ex-husband although they have been divorced.

Robyn has an average height of 5 feet 8 inches. Similarly, she seems to have naturally dark brown colored hair which she prefers to dye into other colors. Likely, she has beautiful hazel colored eyes.

Also, get to know the bio of other members of Real Housewives of Potomac: Candiace Dillard, Katie Rost, and Karen Huger.