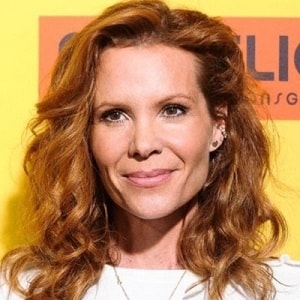 “This is actually something no one knows, but my mom was really the one who created the entire style for 'Teen Witch.' I'm dead serious. She was super involved, and is super creative, so I wore a lot of my actual clothes in the movie. Truly, Louise was my mom's vision. She really created an iconic character.”

Robyn Lively has been married to actor Bart Johnson since September 25, 1999. The pair is the parent of three children: Baylen, Kate, and Wyatt Blake.

The couple is living their blissful life and currently resides in the Hollywood Hills.

Previously, she was in a relationship with Neil Patrick Harris from 1992 to 1993 and with Jason Priestley in 1991.

Who is Robyn Lively?

Robyn Lively is an American actress and she is famous for her role in the film ‘Teen Witch’. She is also well recognized for her roles in the TV shows Doogie Howser’, ‘Twin Peaks’, ‘Savannah’, and ‘Saving Grace’.

Her stepfather is Ernie Lively and she has got a half-brother, Eric Lively (1981), and half-sister, Blake Lively (1987). She grew up in a family of actors (mother, stepfather, and all four siblings) who has been in the entertainment industry.

She has not disclosed information regarding her school and university name. However, it is under review.

She debuted her career as a child actress at the age of six. She debuted on screen in the television movie ‘Summer of My German Soldier in 1978. Later, she made her appearance in several television shows and feature films ‘Wildcats’, ‘Teen Witch’, ‘Silver Spoons’, ‘Punky Brewster, ‘Not Quite Human’, etc.

After that, she was cast as Jessica Andrews in ‘The Karate Kid Part III’ in 1989. But the producers were forced to modify her role of protagonist Daniel LaRusso’s new love interest because she was only 17 years old at that time and the character Daniel was 27 years old. Due to the age gap between them, the romantic scenes between them were rewritten and the pair only developed a close friendship.

Then, she portrayed the recurring roles in ‘Twin Peaks, ‘Doogie Howser, M.D.’, and ‘Chicago Hope’. Robyn made her appearance as Lane McKenzie in the short-lived WB drama ‘Savannah’.

She portrayed the role of NCIS Special Agent Vivian Blackadder in the episodes Ice Queen’ and ‘Meltdown’. But after that role, she never appeared in the spinoff series because of the negative reaction to the character, and Lively was dropped from the series.

Also, she was nominated for Daytime Emmy Awards in the category Outstanding Performer in a Children’s Special for ‘ABC Afterschool Special’ in 1991.

She has an estimated net worth of around $5 million and her main source of income is from her professional career.

There was a rumor of her marriage with her boyfriend Jason Priestley. However, the rumors were false as they did not wed.