Rocco Ritchie was previously in a relationship with singer Chantelle Lee in 2017. Previously, he also dated model Kim Turnbull in 2016. At present, he is believed to be single. 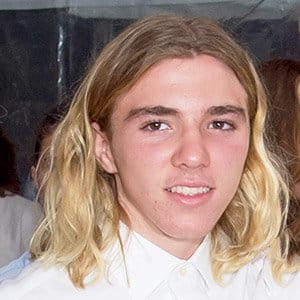 Who is Rocco Ritchie?

Rocco Ritchie is an American actor. People mostly know him as the son of musical superstar Madonna and English director Guy Ritchie. Additionally, he appeared n the 2005 documentary ‘I’m Going to Tell You a Secret.’

Ritchie was born as Rocco John Ritchie in Los Angeles, California on August 11, 2000. He was born to parents Madonna and Guy Ritchie. His father is a famous English filmmaker, businessman and occasional actor while his mother is an American singer-songwriter, actress and businesswoman.

Additionally, he has two adopted siblings: Mercy James and David Banda. In addition, he is the cousin of Levon and Lulu Henry. Rocco is of American and British nationality. Furthermore, he belongs to the mixed ethnic background of English, Irish, French, Italian, and Canadian.

Talking about his education, there is no detailed information available relating to Ritchie’s educational background.

Ritchie initially appeared in the documentary titled ‘I’m Going to Tell You a Secret’ in 2005. Additionally, in 2009, he also had a minor role in the movie ‘Sherlock Holmes’ but was uncredited. In 2015, he also appeared in the video ‘Madonna Feat. Nicki Minaj: Bitch I’m Madonna.’ Furthermore, Rocco has also appeared in ‘Madonna: The MDNA Tour’, ‘Ellen: The Ellen DeGeneres Show’, and ‘Caldeirão do Huck.’ Apart from his career in acting, Ritchie also booked a modeling gig with Adidas in 2017.

Ritchie has not been linked with any award nominations in his career.

Ritchie has not revealed his current salary. Furthermore, there are no details available about his estimated net worth at present.

Ritchie’s relationship with his mother Madonna has often made the news. In addition, he became part of a controversy after he was arrested for possession of cannabis. At present, there are no rumors concerning Ritchie and his career.

Talking about his body measurement, there are no details available about Ritchie’s height and weight at present. His hair color is blonde   and his eye color is brown.