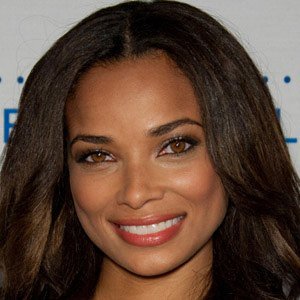 “Mistresses' is about the lives of four women, each going through different versions of infidelity. Their longtime friendship is what gets them through extremely challenging times.”

Rochelle Aytes is a married woman. She has been married to her boyfriend CJ Lindsey since August 28, 2016. Lindsey is a popular American actor who is well known for ‘Third Watch’, ‘Mistress’, and ‘In the Morning’.

They got engaged in July 2015 and married at the Tappan Mansion in Tarrytown, New York. They met for the first time with the help of Aytes’ friend named Kelly Stewart and she is very thankful for him for introducing her husband.

Aytes wore a lace-trimmed strapless ball gown with a rhinestone-studded belt in the marriage ceremony while her husband wore a white blazer and black pants.

Who is Rochelle Aytes?

Rochelle Aytes is an American actress and model who is best known for her role as April Malloy on ABC series ‘Mistresses’ from 2013 to 2016.

She is also well recognized for her performances in ‘White Chicks’ and ‘Desperate Housewives’.

She was born on May 17, 1976, in Harlem, New York City, New York. She is currently 44 years old. However, she has not provided any information regarding her parents, siblings, and childhood. Her surname is of English origin.

Rochelle holds American citizenship and her ethnicity is African-American.

The ‘White Chick’ actress attended Fiorello H. LaGuardia High School and later joined the State University of New York at Purchase College and graduated from there with a Bachelor of Arts in Fine Arts.

She began her career appearing in several commercials for L’Oreal, Coca-Cola, McDonald’s, and Mercedes-Benz.

She debuted her film career from the comedy ‘White Chicks’ in 2004 in which she portrayed the role of Denise Porter. After two years, she appeared as Lisa in the film ‘Madea’s Family Reunion’ from which she gained more reputation in her career. In the same year, she made her appearance as Nicole Jamieson in the test pilot episodes of Tyler Perry’s ‘House of Payne’.

Rochelle appeared as Leigh Barnthouse in the FOX series ‘Drive’ in 2007, played the role of Tara Kyle in the TV show ‘NCIS’, and appeared in the TNT drama ‘Dark Blue’ in 2010. She appeared as a series regular in the drama series ‘The Forgotten’ from 2009 to 2010 in which she was cast as Detective Grace Russell.

After the end of the series, she appeared as a recurring role in the ABC series ‘Detroit 1-8-7’ as prosecutor Alice Williams. Also, she made her guest appearance in three episodes of the seventh season of ABC comedy-drama ‘Desperate Housewives’ in 2011.

She is also associated with several charities and has supported building a well in rural Malawi, Africa.

She has an estimated net worth of around $3 million and she has earned that sum of money from her professional carer.

The American actor CJ Lindsey got down on his knee and proposed Aytes while they were returning from their trip to Vancouver.

They were at the Proposal rock on the Oregon coast at that time. And, she shared her joy and happiness via social media after her boyfriend proposed.

Rochelle Aytes has a height of 5 ft. 6 inches and she weighs 58 kg. Also, she has got dark brown hair and light brown eyes. Her body measurement is 32-28-32 inches.

To know more about Kathryn Harrold, Monica Keena, and Zelda Williams, please click on the link.