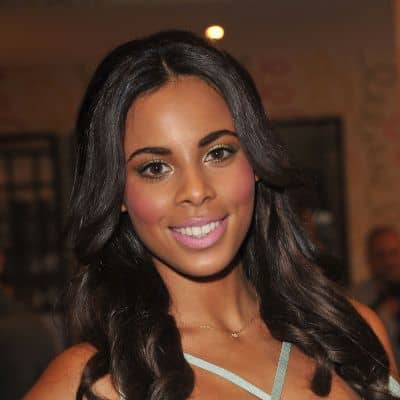 Who is Rochelle Wiseman's husband?

Rochelle Wiseman is in a happily married relationship to her husband Marvin Humes, an English singer and television presenter. On 27 July 2012, the couple officially got married at Blenheim Palace.

They are parents to three children. Alaia-Mai is their first daughter who was born on May 20, 2013, while their second daughter, Valentina Raine was born on 10 March 2017.

Similarly, their son, Blake Hampton is the third child who was born on 9 October 2020.

Rochelle and Marvin started dating in March 2010 and began to live together three months later. On New Year’s Eve in 2011, Marvin proposed to her on the Caribbean Island of Antigua.

There is no further info about her past relationships.

Who is Rochelle Wiseman?

Rochelle Wiseman is a famous British singer and television presenter. She rose to fame after being a member of pop groups, S Club Junior and The Saturdays.

She also served as a co-presenter of the game show, ‘Ninja Warrior UK’ and ‘The Hit List’ since 2019.

Rochelle Wiseman was born in Barking, London, England on 21 March 1989. Wiseman is 33 years old as of 2022 and holds British nationality.

Aries is her birth zodiac sign according to the astrologers. Rochelle Eulah Eileen Wiseman is her full birth name.

Her father holds Jamaican descent while her mother holds English descent so, she belongs to mixed ethnicity. Sophie Piper and Lili piper are her half-sisters. As her parents separated while she was three years old, her mother and uncle Paul Ince brought her up.

Besides, she went to Frances Bardsley Academy for Girls, located in Hornchurch, Havering. She has not disclosed much about her parents, siblings, and further educational life.

In 2001, S Club Juniors were formed, as Rochelle Wiseman joined the reality television series, S Club Search. The group debuted with the single, ‘One Step Closer’ which was released on April 22, 2002.

Their other single ‘Automatic High’ was released on 22 July 2002 which peaked at number two on the UK Charts, by selling more than 55K copies. Likewise, On 21 October, they released their foremost album titled, ‘Together.’

While working for the second album in January 2003, the band combined with S Club on their S club United tour, and they changed their name to S Club 8.

Likewise, S Club 8 became part of the musical comedy program, ‘I Dream’ for 19 Entertainment. After the separation of the S Club 8, she begin to present the children’s TV program, ‘Smile’ that aired on BBC on Sunday Mornings.

Wiseman joined the girl group, ‘The Saturdays’ along with the member of the group, Una Healy, Mollie King, Vanessa White, and former member of S Club 8, Frankie Bridge.

Along with her husband, Wiseman appeared as a regular stand-in presenter for the daytime Magazine program, ‘This Morning.’

From November to December 2018, she presented the reality show, ‘Philip Schofield’. She co-presented ‘Children in Need’ and ‘ Frank Sinatra: Our Way’ on 3 January 2015.

Along with Ben Shepard and Chris Kamara, she co-hosted ‘Ninja Warrior UK’ that aired on ITV. In 2015, she appeared as a host of the twelfth series of ‘Sweat the Small Stuff.’

She voiced the role of a Trumpet in the British children’s TV series, ‘Teletubbies’ in 2017.

Again,  on 20 November 2018, she co-hosted a music quiz show, ‘The Hit List’ along with her husband, Marvin Wiseman that aired on BBC One.

Rochelle Wiseman is living a lavish lifestyle as she is able to amass a net worth of about 7 Million USD.

Though, Wiseman’s monthly and yearly earnings are not disclosed yet.

On 7 Feb 2022, Rochelle Wiseman revealed that she received backlash after being announced as the face of ‘The Black Maternity Scandal’ documentary that aired on Channel 4 on March 29, 2021.

Some criticized her and do not want to her appear as a prominent voice on the issue.

So, this revelation got her controversial.

Rochelle Wiseman stands at the height of 5 feet 8 inches and weighs around 57 Kg.

Her body dimensions are 35 inches bust size, 26 inches waist size, and 34 inches hips size. Wiseman’s dress and shoe sizes are 4(US) and 9 (US) respectively.

With a dark complexion, she has a couple of brown eyes and black-colored hair.

There is also an official Facebook page under her name, which has garnered about 276 K followers.

Likewise, she has a Tiktok account having over 48.5 K followers. But she has posted only three TikTok videos and From April 4, 2020, she has posted one video after which she has not posted any videos actively.