Updated On January 29, 2023 | Published By: Owen
Share this
Married 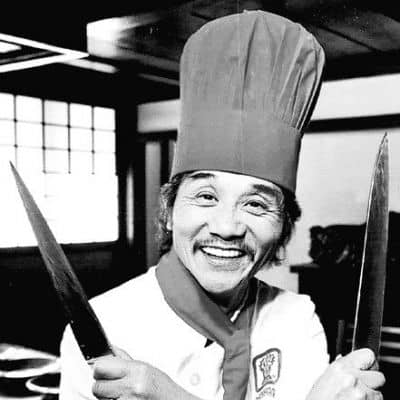 What is the relationship of Rocky Aoki?

The relationship status Rocky Aoki was married. He was married to Keiko Ono Aoki in 2002.

Rocky got married to Chizuru Kobayashi Aoki in 1964 but unfortunately, they got divorced in 1981.

Likewise, Rocky and Pamela Hailburger Aoki wed in 1981 then divorced in 1991.

Who was Rocky Aoki?

Rocky Aoki was a wrestler, restaurateur, and also a Japanese and American actor. He was also a businessman.

He was also widely known as the founder of the Japanese Cuisine restaurant company Benihana, having more than 100 franchises.

Sadly, On July 10, 2008, Rocky died due to pneumonia in New York City. He had been suffering from diabetes, Hepatitis C, and cirrhosis of the liver at the time of his last breath. This news was very shocking to his family as well as to his audience.

Rocky Aoki was born in the year of 1938, on Oct 9, in Tokyo, Japan. The name of the rocky at the time of birth is Hiroaki Aoki.

The parents of Rocky owned a coffee and tea club named Ellington and also owned a popular Tokyo jazz.

He was raised in New York, United States, and also completed his study from there. His nationality is American. Rocky belongs to an Asian family so, his ethnicity is Asian. Rocky is fond of reading and traveling.

The information about the schooling of rocky is still not published so there is no accurate information about it. However, he graduated from Springfield College in Massachusetts then he was also presented with wrestling scholarships from several American colleges. Then after he was repositioned to CW Post College in Long Island, New York.

Rocky was well known because of his profession i.e Businessman and actor. Talking about his profession, he owned a Japanese Cuisine restaurant company Benihana, which has more than 100 franchises.

They chose to run the restaurant which will be based on the Teppanyaki style of Japanese cuisine, involving an iron griddle used to cook dishes.

Rocky opened his first restaurant outside New York City in Chicago, They also got many Franchises across the world which help Rabin to uplift his career.

Rocky started to gain popularity after the publicly traded arm of BEnihana was established in 1987 AD.

Talking about the awards, Rocky won the National Wrestling championship in Japan which is one of his greatest achievements for him.

Their net worth of Rocky was approximately $40 million as he has owned many businesses. The main source of his income is his business.

To date there are no rumors or controversy about Rocky so, there is no information about it.

Talking about social media Rocky does not seem active on any kind of social media so there is no relevant information about it.