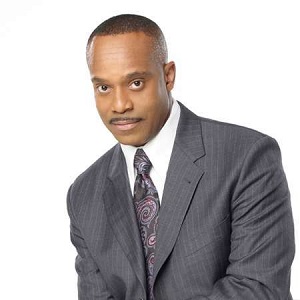 As an actor, you can believe that you are the reason for a show's success, but these things are a brand name now. They're like Coca-Cola. It's like, with or without you, people are still gonna drink it

Talking about his relationship, he married Gabrielle Bullock in 1996. The couple has one daughter namely, Elissa Carroll. They are living a happy life together with no sign of any marital affairs.

Who is Rocky Carroll?

Rocky is an American actor, his birth name is Roscoe Carroll. Likewise, he is well known for his roles as Joey Emerson on the FOX comedy-drama Roc (1991–1994). Similarly, he is also played a supporting role in the 1995 thriller film Crimson Tide.

Rocky was born in Cincinnati, Ohio, the United States on July 8, 1963, there is no information about his family. Also, even there is no information about his siblings. He belongs to American nationality and English ethnicity. His birth sign is Cancer. Talking about his education, in 1981, he graduated from the School for Creative and Performing Arts (SCPA). Then, he attended The Conservatory of Theatre Arts at Webster University.

Talking about his career, he helped to open doors for actors of color, by taking on non-traditional roles that were rarely portrayed by Black actors in Shakespeare dramas. Whereas, he also had a starring role as Dr. Keith Wilkes in the TV series Chicago Hope.

Likewise, he has also guest starred in several other TV programs including The Agency, Boston Legal, Family Law, The West Wing, Law & Order, The Game, ER and Grey’s Anatomy. Eventually, he has had roles in many Hollywood films such as Born on the Fourth of July, The Ladies Man, Crimson Tide, The Great White Hype, A Prelude to a Kiss, The Chase, Best Laid Plans and Yes Man.

Besides that, in the fifth season of the CBS drama NCIS, he was also featured in a recurring role as Assistant Director Leon Vance.  In addition to being a series regular on NCIS, Carroll has also directed seven episodes of NCIS, making his directorial debut with the Season 12 episode, “We Build, We Fight”.

Rocky Carroll: Salary and Net Worth

There was a rumor that, he will be leaving the show due to his age and failing health. Currently, there is no rumors and controversies regarding his professional and personal life.

On talking about his body measurements, Rocky has a height of 5 feet 9 inches. Additionally, he weighs is 70Kg. Rocky’s hair color is black and his eye color is dark brown.