Rod Laver is a married man. He married Mary Shelby Bensen on June 20, 1966, a divorcee with three children from her previous marriage. Their marriage was held in California was attended by other tennis players including Ken Rosewall, Barry MacKay, Mal Anderson, and Lew Hoad. The couple had a son named Rick Laver, and they lived in various residences in California. The marriage lasted until her death on November 12, 2012. 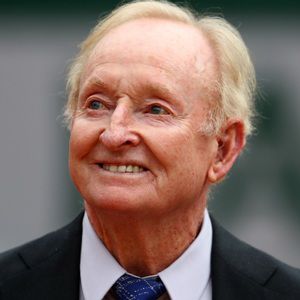 When you have the opportunity, you strike.

The time your game is most vulnerable is when you're ahead

There's a lot of ingredients go into being a good tennis player.

The next point - that's all you must think about.

When you've got your man down, rub him out.

Who is Rod Laver?

A famous Australian tennis player Rod Laver. Likely, he was also ranked No. 1 professional from 1964 to 1970, spanning four years before and three years after the start of the Open Era in 1968. He also was the No. 1 ranked amateur in 1961–62.

Rod Laver was born in Rockhampton, Queensland, Australia on August 9, 1938. His birth name is Rodney George Laver and he is currently 80 years old. His father’s name is Roy Laver and his mother’s name is Melba Roffey. He received his training from the legendary tennis player, Harry Hopman, in Queensland.

He has four siblings namely, Trevor Laver, Lois Laver, and Bob Laver. Rod holds Australian citizenship, but his ethnicity is unknown. His birth sign is Leo.

Talking about Rod’s education history, he is a school dropout. There is no information about his educational achievements.

Talking about his profession, in 1959, he competed in the finals of ‘Wimbledon’ and won the mixed doubles game, where he teamed up with his American counterpart Darlene Hard.

In the following year, he participated in the ‘Australian Championships’, winning the five-set final match against Australian player Neale Fraser. Likewise, in 1961, he took part in the ‘Wimbledon’ and won the singles title for the first time.

During 1962, Laver won seventeen tennis matches, along with four Grand Slam tournaments. The most memorable of these tournaments were the ‘Italian’, ‘French’ and ‘German’ Championships.

He won the ‘French Championships’ with a lot of difficulties, against Australian Roy Emerson. At the ‘Wimbledon’ and the ‘US Championships’, the same year, he played exceptionally well, losing very few matches. In December 1962, Rod won the ‘Davis Cup’, as a part of the Australian team. This established him as a professional world tennis player, like Lew Hoad, Pancho Gonzales, Ken Rosewall, and Andrés Gimeno.

Whereas, from 1963-to 70, this skilled player was victorious at the ‘U.S. Pro Tennis Championships’ on five occasions. At the beginning of the same period, he established himself as the no. 2 player in the world. During 1964, Rodney won tournaments like the ‘Wembley Championships’, where he beat his friend Rosewall, and the ‘US Pro’, defeating Pancho Gonzales.

The next year, Laver moved up to the position of no. 1 in the world rankings, after having seen victory at seventeen tennis championships. In the following year, he won sixteen championships, and in 1967, he tasted victory again, with nineteen tournament wins to his name.

These wins included ‘US Pro Championships, the ‘Wembley Pro’, the ‘Wimbledon’, and the ‘French Pro’. Moreover, in the ‘Wimbledon final, he defeated fellow Australian Rosewall by 6–2, 6–2, 12–10.

In the same year, he took part in ‘Grand Slam matches, becoming the first person to win the ‘Open Era’ championship at the ‘Wimbledon’. Besides that, Rodney won a straight-set against Australian player Tony Roche in the final.

Moreover, in 1968, he also won prestigious tournaments like ‘US Professional Championships’, which played on grass courts, and the ‘French Pro Championships’ on clay courts, thus bagging the world no. 1 spot.

In the following year, in 1969, Laver played several tournaments, winning all the four Grand Slam championships. He also won the ‘South African Open’, ‘Philadelphia US Pro Indoor’, ‘US Professional Championships’, and the ‘Wembley British Indoor’. He was thus victorious in 106 matches out of the 132 he played.

During the same period, Rod signed contracts with the tours ‘National Tennis League’ (‘NTL’), and ‘World Championship Tennis’ (‘WCT’). Owing to this, he participated in only five ‘Grand Slam championships in two years.

During 1973, he won several championships, including the ‘Davis Cup’. In the following year, he won only six championships, and his world ranking dropped to No. 4. Three years later, he signed a contract with the ‘World Team Tennis, a tennis league.

As of 2022, he has an estimated net worth of around $20 million earned from his professional career.

He has been successful in maintaining his celebrity status and has not been involved in any types of rumors and controversies in his personal and professional life.

Rod has a height of 5 feet 9 inches. Additionally, he weighs is 69Kg. Rod’s hair color is grey and his eye color is blue.

Also, read the affair, salary, the net worth, controversy, and the bio of Ivan Lendl, Lisa Bonder, Tommy Haas

Transgender actress Laverne Cox is upset over deadnaming and gender assignment of dead transgenders based on their birth names!