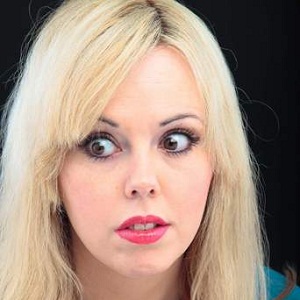 Fast paced, refreshing and exciting talent with an engaging and original world-view.

Roisin Conaty is possibly single. There isn’t any information regarding her romantic relationships. Her personal life isn’t in the limelight as her career path is.

Who is Roisin Conaty?

Bold and beautiful Roisin Conaty is an award-winning British comedian and actress. She is best known for her appearance in “Hero, Warrior, Fireman, Liar”, “Impractical Jokers”, and “Have I Got News for You”.

British comedian Roisin Conaty seems to be a pretty private person who hasn’t much revealed regarding her personal life. She was born in Camden, London on 26 March 1979.

She is of English ethnicity and has British nationality. There isn’t much information regarding her early life and education.

Roisin Conaty is started her work as an actor from the year 2004. She found entertainment representation with the Avalon Group and started her career. In 2010, she won the Best Newcomer Award at the Edinburgh Festival for her show Hero, Warrior, Fireman, Liar.

With the award, she became one of only five women to receive an Edinburgh Comedy Award in 30 years. On 11 November 2010, she appeared on series 3, episode 4 of Russell Howard’s Good News. and she performed her show at the Melbourne Comedy Festival in April 2011. In 2016, she was a guest on the “Jonathan Ross Chat Show” alongside Richard Gere, Jack Black, and Berry Gordy.

County appeared in numerous movies including “Man Down“, David Brent: Life on the Road, Impractical Jokers, and “GameFace”.

Her success in the career path has paid her well financially. Her net worth is not available through any source.

Conaty hasn’t had any rumors or suffered controversy in her life. She has balanced her personal life out of the spotlight

Roisin Conaty has blonde hair color and her eye color is brown. There is no information about her height, body weight, and shoe size.