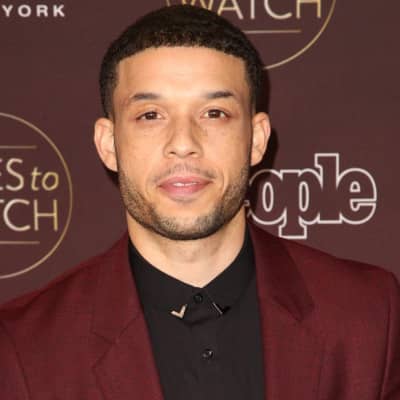 Roland is single at present. He has never shared any information related to his love life or any past lovers. Also, he has not been engaged before. Any information on his personal life is kept private. He might have a lover but is keeping it away from the media. It seems like he is more focused on his career building rather than any relationship at the moment.

Who is Roland Buck III?

Roland Buck III is an American Actor, Producer as well as director. He is well known for playing a  repeating role of Dr. Noah Sexton on NBC’s ‘Chicago Med’ and has also starred alongside Adam Sandler and Chris Rock for the Netflix comedy ‘The Week of’.

Roland Buck III was born on 13 April 1988 and in Chicago, Illinois, USA. However, he was raised in Dallas and moved to Los Angeles. Currently, he is 33 years old and falls under the zodiac sign of Aries. He holds American nationality and belongs to African- American ethnicity.

As for his parents, the name and information on them are still not given to the public. Other details in his relatives, cousins, siblings, etc are not given at the moment. But, it seems he has a good relationship with his parents and had a supportive childhood.

Roland Buck III is best known for his recurring role as Dr. Noah Sexon in the drama series “Chicago Med” which is on the NBC TV network. Dr. Noah is a medical character in the series. This series is presently in production on its sixth season. He is also known for appearing as one of PEOPLE Magazine’s One to Watch.

In November of 2017, he finished shooting the role as SPC Rafael Martin for National Geographic’s award-nominated mini-series ‘The Long Road Home’ which is based on the book by ABC News reporter Martha Raddatz. It is about the brave fight for survival during the Iraq War when the 1st Cavalry Division from Fort Hood was aggressively ambushed on April 4, 2004, in Sadr City, Baghdad.

In 2018, Roland has also acted alongside Adam Sandler and Chris Rock in the Netflix comedy ‘THE WEEK OF’ which was directed by Robert Smigel and was written by him as well as Sandler. The film is about a wildly comedic show of two extended families meeting for a memorable family wedding.

Moreover, he was cast in the film “Sleight” which was premiered at the 2016 Sundance Film Festival. He has starred in many Theatre plays that include Los Angeles productions of In the Blood, Getting Married, and Arabian Nights.

Roland Buck III is yet to achieve many awards and nominations. However, he has played in an award-nominated mini-series on the National Geographic channel, “The Long Road Home”. He is a very talented and skillful actor who is sure to get awards in the near future.

The information on his net worth, salary, and assets are not available as of now. It seems Roland has not revealed his net worth to the public yet. Even so, he must earn a decent amount considering his profession and his source of income is his acting career as well as producer and director career. His net worth is still under review.

There seem to be no rumors about him as of yet. Roland has never been included in unnecessary media attention. He is careful enough to not be involved in any rumors and controversies. He seems like a person who would deal with these false rumors in a mature way and clear any misunderstandings.

Roland stands tall at the height of 70 inches (5 feet 10 inches, 178 cm). Any other details on his body measurement are not known at the current moment. He seems to be pretty fit and healthy-looking in his pictures. Furthermore, he has a pair of attractive brown eyes and short black hair.

Roland is popular on social media platforms as well. On Instagram, he is active as ‘@rolandbuckiii‘ and has earned over 27k followers. He is also available on Twitter under the username ‘@RolandBuckIII‘ with more than 3.7k followers. He is present on Facebook as ‘Roland Buck III‘. Moreover, he has his own website ‘www.rolandbuckiii.com‘ for any business inquiries.