Roma Downey is an actress, producer, and writer who is best known for Touched by an Angel’.

Roma Downey is a married woman. She is married to the famous British TV producer, Mark Burnett. The couple has worked in several movies and TV series together including The Bible and Son of God.

They exchanged wedding vows on April 28, 2007, at their home in Malibu. The wedding ceremony was officiated by Roma’s ‘Touched by an Angel’ co-star, Della Reese. They don’t have children from their marriage but Mark has two sons, James Burnett, Cameron Burnett from his previous marriage, and Roma has one daughter, Reilly Anspaugh from her previous marriage.

Previously, she has been married twice. Her first marriage was with Leland Orser. He is known for his work in Alien Resurrection, Seven, and Saving Private Ryan. They married in 1987 and got divorced in 1989.

Her second marriage was with David Anspaugh. He is a producer and director best known for Best Shot and Rudy. The couple exchanged wedding vows on 24 November 1995 and got divorced on 15 March 1998. From their marriage, they have a daughter named Reilly. 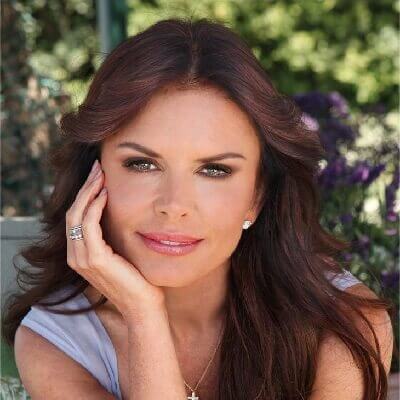 I have the soul of a singer and do splendidly in the shower, but the world will never hear it. Basically, I'm the only Irish person who can't carry a tune

Who is Roma Downey?

Roma Downey is a British actress, producer, and writer. She is best known for her portrayal of Monica in the TV series, ‘Touched by an Angel’ – a role for which she received a TV Guide award and multiple Golden Globe and Emmy nominations.

Roma Downey was born in Derry, County Londonderry, Northern Ireland, UK, on May 6, 1960. As of 2020, her age is 59. She was born to parents Patrick Downey (father) and Maureen O’Reilly (mother).

Her father was a mortgage broker and her mother was a homemaker. She has five elder siblings. Four of them were from her father’s first marriage, John, Patrick Jr., Ann, and Jacinta. After marrying her mother, she gave birth to two children, Lawrence, and Roma.

Growing up was not easy for her as her mother died of a heart attack when she was just 10. She spent her childhood days in a three-bedroom brick row house in a working-class Derry area. Her father also left the world when she was 20. During her early days, she wanted to be a painter

Her ethnicity is Irish.

Talking about her education, she went to a Catholic convent school. After that, she went on to receive a Bachelor’s degree in Arts from  Brighton College of Art.

She studied BA(Hons) Expressive Arts at Brighton Polytechnic, which is now Brighton University.

In 2010, she graduated from the University of Santa Monica with a master’s degree in Spiritual Psychology

How much is Roma Downey worth?

The Irish actress has an estimated net worth of around $100 million as of 2022. She earned $100k per episode of ‘Touched By an Angel’.

Her husband, Mark Burnett has an estimated net worth of around $450 million. He is a British television producer famous for helping the popularity of reality television increase massively in America.

Roma Downey stands at a height of around 5 feet 4 inches. She weighs around 63 kg. She has an hourglass-shaped figure with measurements of 38-27-38 for breasts, waist, and hips.

Her hair color is red and she has dark brown eyes.

Roma Downey’s career in Hollywood started after she decided to move to New York after an agent suggested to her. She then worked as a coat checker at a restaurant before getting cast in some Broadway shows.

Her big break came in 1994 after she landed the role of the angel Monica, on the TV series, ‘Touched by an Angel’. It remains her best-known role to date. She starred alongside the popular singer-actress, Della Reese. The show ran from 1994 to 2003 during which she received a TV Guide Award and two each Emmy and Golden Globe nominations.

In 2011, she and her husband produced the series, ‘The Bible’. The show which was filmed in Morocco has more than 100 million viewers in the U.S and has its place on Amazon’s best sellers in movies and television. It was nominated for the Primetime Emmy Award for Outstanding Miniseries or Movie.

Some of her other well-known movies and TV shows include ‘Borrowed Hearts’, ‘Second Honeymoon’, ‘The Division’, ‘The Sons of Mistletoe’, ‘The Dovekeepers’, etc.

In 2014, Downey and her husband received criticism for ‘Son of God’. The movie was based on ‘The Bible’ miniseries and the devil the movie looked like the US President of that time, Barrack Obama. She later came out in public and said that they have removed the scene with the devil because the movie was about god, not the devil.

In 2019, she and her husband produced the Netflix thriller, ‘Messiah’. The thriller was a subject of controversy as it had a prophet who defies a resurgent Islamic State in Syria. Moreover, it also has shooting scenes on Jerusalem’s holy Temple Mount. All of these were subjects of controversy but they claimed that it was “proactive, not offensive”.

You may also like to read the Bio, Career, Net Worth, Body Measurements, Relationships, and more about Mark Burnett, Emma Stone, Emma Kenney, etc.