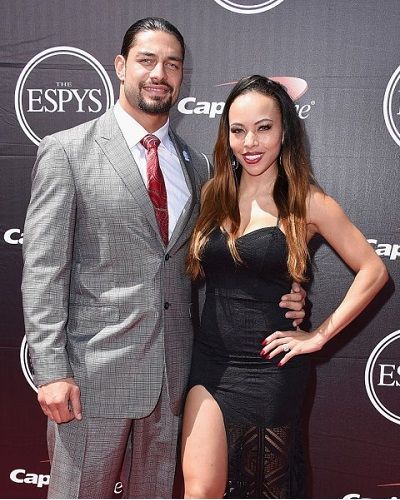 “Three, with two in the oven. I’m looking to be papa bear of five. Breaking news—we haven’t really shared that.”

On 14th December 2008, Galina gave birth to her daughter Joella Anoa’i. After eight years of birth of Joella, she again gave birth to twin boys in 2016.

Reigns revealed that they did not make the birth of twin official,

“It’s funny how people come up with, like, all these conclusions. Like, nobody knew what was going on with me. I’m not like (The) Miz where I announce it on every RAW. ‘He’s sick!’, ‘something happened!’,”

Roman and Galina walked down the aisle on 6th December 2014. They met each other during her years at the Georgia Institute of Technology. They dated for a few years before getting engaged in the year 2012.

They have been spotted together several times during WWE events.

Who is Galina Becker?

Galina Becker is a former athlete and a fitness model. She completed her studies at Mt. Pleasant High School. Becker was a great performer in hurdles and high jumping. Similarly, she trained under Steve Nelson, who started as a school teacher at Mt. Pleasant.

Galina was educated by the Georgia Institute of Technology with a degree in management. Becker used to perform in track and field events often. After her graduation, she started off as a fitness model.

Also read British model Jodie Turner-Smith gave birth to a baby girl! When did she and her husband Joshua Jackson marry?

Roman Reigns have been battling leukemia due to which he has a high risk of getting infected from the ongoing coronavirus. Due to this reason, his name has been withdrawn from the competition.

Likewise, there has been an order for WWE employees to not mention his name on television. Also, there was a suggestion that Reigns’ WWE future was in doubt after he made the choice to pull out of the WrestleMania title match as he needed to put his health first, due to him being at more of a risk.

Currently, he has signed to WWE where he performs under the ring. He is famous as a Professional Wrestler. He is well known for his appearance on ‘WWE Raw’ or ‘Monday Night Raw’. Read more bio…

Martha Hart, the widow of late Owen Hart criticizes WWE for their negligence and hand in the tragic death of her husband!
Tags : Wrestler WWE