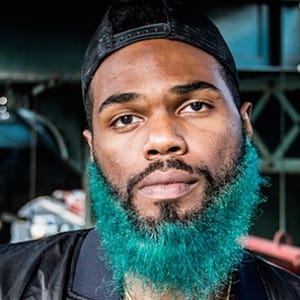 What is the relationship of Rome Fortune?

Rome Fortune is currently in a relationship with Anna Boulais. There are no further details regarding this relationship.

Who is Rome Fortune?

Rome Fortune (Jerome Fortune) is an American hip-hop recording artist. People mostly recognize him for the release of his ‘Beautiful Pimp’ mixtape in 2013. To date, he has released 6 Eps.

Fortune was born in Philadelphia, Pennsylvania on October 13, 1988. He comes from a family of musicians. Additionally, he became interested in the world of music during his childhood years and began rapping in high school. He is of American nationality. Furthermore, there are no details about his ethnicity at present.

Talking about his education, there is no detailed information relating to Fortune’s educational background.

Fortune joined British indie-rock group Glass Animals’ for their U.S. and U.K. tours. He has collaborated with several musicians till date including OG Maco, Dun Deal, and ILoveMakonnen among others. Additionally, he joined IAMSU’s ‘Eyes on Me’ North American tour in March 2015.

Fortune draws inspiration from jazz and has said that he is influenced by 90s rap, particularly ‘DMX’. In addition, he entered the world of electronic music for his ‘Small VVorld’ EP. Some other EPS that he has released include ‘The Air Mattress’, ‘V O Y E U R’, ‘Beautiful Pimp II’, ‘Drive, Thighs, & Lies’, and ‘YEP’. Furthermore, some of his mixtapes are ‘solo’, ‘Beautiful Pimp’, ‘VVORLDVVIDE PIMPSATION’.

Fortune has not revealed his current salary. Additionally, there are no details about his estimated net worth at present.

Fortune has not been part of any notable controversies in his career to date. Furthermore, at present, there are no rumors concerning his life and career.

Talking about his body measurement, there are no details about Fortune’s height and weight.  His hair color and eye color are black.

Being a celebrity face not through herselves, however through her beloved husband, Rapper Dr. Dre! Know more about the pretty Nicole Threatt!