Romelu Lukaku is in a relationship. He is having an affair with Sarah Mens. They were caught holidaying and cozying in public places. However, there is not much information about the couple.

Previously, Lukaku has dated Julia Vandenweghe in 2014. However, he always kept it private and never disclosed his relationship. 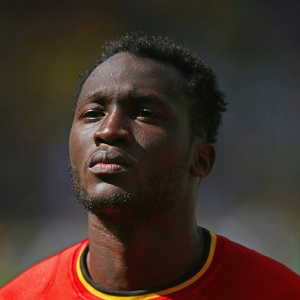 Who is Romelu Lukaku?

Romelu Lukaku is a Belgian professional football player. Lukaku also plays for the Premier League club Manchester United as a striker. His best parts consist of strength and scoring abilities.

Lukaku is famous for his achievements, scoring 50 goals before age of 23 which only five players managed to do so. He has netted 80 goals before turning 24. Lukaku has also played for Premier League clubs such as Chelsea and Everton.

His younger brother, Jordan Lukaku is also a footballer, trained in the youth academy at Anderlecht, and currently playing for SS Lazio in Italy.

During his early life, Lukaku began to play football at a very young in the local club Rupel Boom at the age of five. From his childhood, he idolized Chelsea legend Didier Drogba.

Moreover, he also wants to play there at Stamford Bridge, which also became a success in later days. Lukaku’s educational background is unknown.

Lukaku joined Anderlecht when he was just 16. During the first season, 2009-2010 Lukaku scored his debut goal as a substitute on 24 May 2009 against Standard Liège. He completed his first season as a top goal scorer where Anderlecht managed to win their 30th Belgian title. In the 2010-2011 season, he netted 20 goals but can’t defend their title.

Lukaku signed for his dream club Chelsea in August 2011 for an estimated fee of €20 million. He couldn’t do his best to secure the position and then Chelsea manager Jose Mourinho sent him on a season-long loan to West Bromwich Albion on 10 August 2012. Despite being sent off on a loan from Chelsea he still managed to become the sixth-highest goalscorer in the season 2012-2013 netting 17 goals.

Romelu Lukaku’s turning point in his career was in 2013, his transfer to Everton on a season loan. In the debut game against West Ham, he scored a stunner brace to help his team win. He also netted in a win 3-3 over rival Liverpool. He assisted Everton in securing fifth place in Premier League, where he tasted the net 15 times in 31 games. On July 24 he became a permanent player of Everton signing a five-year deal for a handsome amount of  £28 million, which was also a club record.

During the 2016-2017 season, he was Everton’s first player to score in six consecutive Premier League matches. He scored 17 goals in the season equalling his highest goal record held in former club West Brom. His first hat-trick came against Sunderland on 12 September 2016, in the very first match of the season.

He was the 12th quickest player in the Premier League history to score a hat-trick, in 11 minutes and 37 seconds. It was his most decorated season ever scoring 21 goals which was the most by anyone in a single season by an Everton player. He also became the fourth player and first foreign player to score 80 Premier League goals in his career before the age of 24.

Lukaku got his dream transfer to the theater of dream, Manchester United, for a whopping amount of £75 million with a five-year contract. He was signed soon after Wayne Rooney moved to Everton.

Lukaku hit his first international hat-trick on 26 May in the FIFA world cup 2014 against Luxembourg. At UEFA Euro 2016, Lukaku again did something magical, he scored a brace in Belgium’s 3-0 win over the Republic of Ireland in the second group stage match win on 18 June 2016.

Lukaku is earning a very handsome amount of money through his endorsements such as Kinder Bueno and Nike. Being a football star, adding up his annual earnings he has an estimated net worth of 60 million euros as of 2022.

At such a young age, he has already achieved what many players just dreamt of. On 20 April 2017, Lukaku was named to the PFA Team of the Year for the first time.

Romelu Lukaku is playing for his country as a sticker. The Euro cup matches will take place in different countries which are listed below:

Romelu Lukaku has taken him out of any trouble or controversy. It seems like he has focused only on his professional career which he is doing so beautifully.

Before completing a move to Old Trafford, the news of rejoining Chelsea is in the spotlight. However,  his move to Manchester United has shut down all the rumors.

He has a height of 6 feet 3 inches with a bodyweight of 94 kg. He has black hair color and his eye color is also black.

Also get to know more about the birth facts, education, career, net worth, rumors, height, and social media of different personalities like Fred Biletnikoff, Cris Carter, and Christian McCaffrey.