Romeo Langford is an American basketball player. He is currently single.

Romeo Langford is currently single. Also, he has not been linked with any other celebrities neither in the past nor in the present. He is currently focused on his career. Hope, he will soon find the perfect one soon. 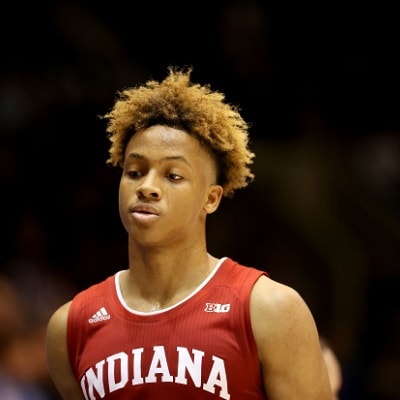 Who is Romeo Langford?

Romeo Langford is an American basketball player. He currently plays for the Boston Celtics of the National Basketball Association (NBA), and already played for Indiana Hoosiers.

He was born on October 25, 1999, in New Albany, Indiana. He is currently 22 years old. Romeo was born to father Tim Langford, an insurance company employee and mother Sabrina Langford, who works at Clark Memorial Hospital. He has two siblings- sisters Tisha Langford and Tiffany Langford.

Romeo holds American citizenship but his ethnicity is mixed(African-American).

He attended New Albany High School and graduated from there and he enrolled at Indiana University in 2018.

Langford used to play basketball in both high school and college and was a top basketball player. He was inspired by NBA player Lebron James and had started playing basketball in the first grade.

His average was 28.7 points, 8.9 rebounds, and 3.4 assists per game in his junior year and had led the team a 25–4 record and to the Class 4A state quarterfinals. He scored career-high 63 points against Jennings County in his senior years.

Recently, he declared for 2019 NBA draft and was selected in the 14th pick by Boston Celtics.

He won 2018’s Indiana Mr. Basketball and became Boys Athlete of the Year, etc. In addition, he represented the United States and secured a Bronze medal in the FIBA U19 World Cup.

His exact salary has not been revealed and he is expected to sign a contract in the neighborhood of $2.878 million and $3.022 million dollars in his first two years. In addition, he was offered sponsorships by Adidas which ranges around $100,000 to $150,000 but the deal is in dispute. As of 2022, he has an estimated net worth of $2 million.

Romeo has been successful in keeping himself far from rumors and controversies in his personal and professional life.

He has a height of 6 ft. 6 inches and weighs 98 kg. Romeo has dark brown eyes and black hair. Other information regarding his shoe size, dress size, etc. are not available.