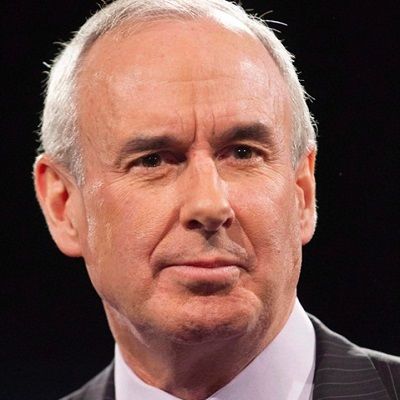 Ron MacLean is married to Cari MacLean. They walked down the aisle in the year 1984 and since then are living together happily.

Ron used to seek Cari out at school and at parties. He used to visit the local ice cream shop so that he would run into her.

All of his small efforts succeeded and he won her heart. When Cari was studying at University in Edmonton, he used to visit her on weekends.

Tragedy struck when Cari lost a child. It was heart-breaking for both Ron and Cari and to make it worse, they realized they would never have children.

They reside in Oakville, an affluent suburb west of Toronto.

Who is Ron MacLean?

Ron MacLean is an Award-winning Canadian sportscaster. Ron is well-known as the host of Hockey Night in Canada.

As of 16th November 2019, he hosted Saturday’s show for the first time after his co-host Don Cherry got fired.

Ronald Joseph Corbett MacLean was born on 12th April 1960 in Zweibrucken, West Germany. He is the son of Ron MacLean Sr and Lila MacDonald of German-Canadian ancestry.

His father worked as a communications operator at Station Edmonton. When Ron was fourteen months old, his family moved back to Canada.

Again after a few years, his father was stationed in Whitehorse, Yukon with the Royal Canadian Air Force before relocating eventually in Sylvan Lake, Alberta.

Ron started his broadcasting career in 1978 as a part-timer in CKRD-FM, CKRD-AM and as a weather presenter at CKRD-TV.

His duties were little more than pushing buttons and playing commercials and he was still in high school at that time.

In 1986, Ron started working on Hockey Night in Canada as a Telecast Anchor out of western Canada.

Later, he was transferred to Toronto games after Dave Hodge was suspended. That spring, he worked on his first Stanley Cup and he has been the primary game host since then.

He hosts Coach’s Corner with Don Cherry. Similarly, he has been a part of the CBC’s Olympics coverage since the year 1988.

He worked as the main sportscaster and host for the 2008 Summer Olympic Games in Beijing.

In the year 1993, he served as an ice level reporter for NBA Sport’s coverage of the NHL All-Star Game in Montreal.

The estimated net worth of Ron is $3 million US. Similarly, he receives an annual salary of $1 million US.

He has light hair and black eyes.

You may also read the age, parents, career, net worth, body measurements and social media of Shaun Keaveny, Matt Siegel, and Anna Ford