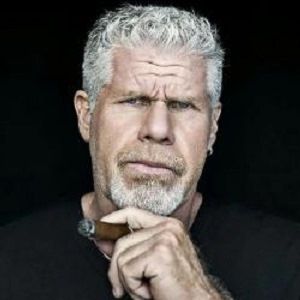 I've done millions of mediocre movies. I've done way more than my fair share. You do what you gotta do. This is not heart surgery. I'm not curing cancer. I'm just trying to put my kids through school

People are doing sitcoms on stage rather than theater. You go to the theater, and it's as if you were watching a sitcom at 8:30 on Channel 4.

What is the relationship of Ron Perlman?

Talking about his relationship, he is a married man. He married Opal Stone, a jewelry designer by profession, in February 1981.

They have a son named Brandon Avery Perlman and a daughter named Blake Amanda Perlman.

Who is Ron Perlman?

Ron Perlman is an American actor and voice actor. He is well known as a collaborator of Hellboy director, Guillermo del Toro, having roles in the del Toro films Cronos (1993), Blade II(2002), and Pacific Rim (2013).

Likewise, he is also known for his voice-over work as the narrator of the post-apocalyptic game series Fallout, Clayface on Batman: The Animated Series, Slade on the animated series like Teen Titans, The Lich on Adventure Time, and The Stabbington Brothers in Disney’s animated film Tangled (2010).

Who are the parents of Ron Perlman?

Ron was born in Washington Heights, New York, the United States on April 13, 1950, to parents Bertram ‘Bert’ Perlman and Dorothy Perlman. His father was a jazz drummer and television repairman and his mother was a municipal employee.

Whereas, he belongs to American nationality and Ashkenazi Jewish ethnicity. His birth sign is Aries.

Talking about his education, firstly, she attended Lehman College. Then, he attended the University Of Minnesota.

In talking about his profession, he started his career as a theatre actor, working in various theatres including Knickerbocker Theatre, Brooks Atkinson Theatre, Lincoln Center, and Circle in the Square Theatre.

Eventually, he was offered the role of ‘Vincent’ in the CBS fantasy drama ‘Beauty and the Beast’.

Whereas, he also played the lead character of the mythic, noble beast-man opposite Linda Hamilton who portrayed the ‘beauty’. In fact, he was part of the show for 55 episodes between 1987 and 1990.

In the next two decades, he was offered numerous roles in films like ‘The Name of the Rose’, ‘Romeo is Bleeding’, ‘The Island of Dr. Moreau’, ‘Alien Resurrection’, and ‘Enemy at the Gates’.

Likewise, he also appeared in the second part of the American superhero film ‘Blade’ alongside Wesley Snipes in 2002. Then, he returned as ‘Hellboy’ in the sequel (‘Hellboy II: The Golden Army’) of the original superhero movie in 2008.

In talking about his lifetime achievements and awards, he won Golden Globe Awards for Best Performance by an Actor in a Television Series – Drama for Beauty and the Beast (1987), he won Chainsaw Award for Best Actor for Hellboy II: The Golden Army (2008).

Likewise, he won the Audience Award for Narrative for To Dust (2018)  (feature film).

Ron Perlman: Salary and Net Worth

There is no information about his salary. His net worth is around $15 million.

What are the body stats of Ron Perlman?

On talking about his body measurements, Ron has a height of 6 feet 1 inch. Additionally, he weighs is 86Kg.

In addition, his chest, waist, and biceps sizes are 45-34-15 inches respectively. Ron’s hair color is brown and his eye color is blue.