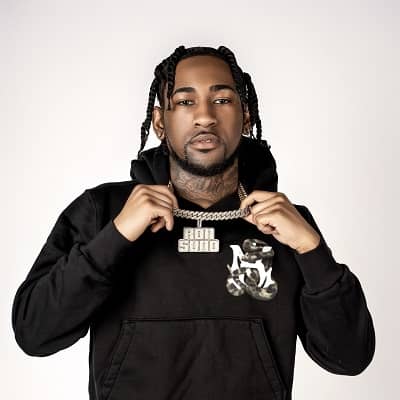 Ron Suno is most probably single as of now. Even though he hasn’t shared his relationship status, his social media posts, videos, and public appearances all suggest that he is single.

He is also quite private when it comes to his love life. As such, there is no information about his past girlfriends and relationships as well.

Who is Ron Suno?

Ron Suno is a popular American rapper, songwriter, comedian, and Youtuber. He is best known as a rising drill rapper and as an entertaining Youtuber.

Ron Suno; real name Keron Joel Foriest; was born on the 3rd of August, 2000 in Bronx, New York, USA. As of now, his age is 21. His nationality is American and his ethnicity is African American.

Ron hasn’t shared any details regarding his parents as of now. He hasn’t mentioned anything about his siblings as well so he might be a single child. Ron grew up in the Bronx and started rapping and recording his songs from the age of 13. Unfortunately, none of his songs gained much attention and so he started making comedy videos as well. And once these videos blew up, Ron used his popularity to release his songs to a wider audience.

Ron hasn’t shared any details regarding his educational journey. He seems to be well educated but we can’t be sure without any information about it.

Ron started his rise to fame through social media. He uploaded a lot of hilarious and entertaining videos on Instagram. A large number of people liked his videos and he started gaining more and more followers on his account.

Then, in 2017 he started the Weave Challenge on social media which blew up his social media accounts. He gained over 500k followers on Instagram really fast and became quite well known.

And Ron used his internet success to market his rap songs to a wider audience. Initially, his songs like With My Crew, Party on Jump, etc didn’t stand out too much.

People still recognized him as a comedian rather than a rapper. But this all changed once he uploaded a remix of the hit song Pinnochio featuring Blueface.

People began to see his musical talents after this and his songs since then have seen a lot of success. His 2020 single Spider-Man was loved by the fans and many wanted more.

Soon after, Ron came through with his album titled Swag Like Mike. The album is pretty solid for his early work and pays homage to legends such as Michael Jordan, Michael Jackson, and Mike Tyson.

Along with all this, Ron is quite popular on Tiktok and on Youtube. As of now, he has over 180k subscribers on his Youtube channel and has over 500k followers on his Tiktok account.

Ron’s net worth is estimated to be in the range of 100k to 500k USD as of 2021. He hasn’t shared any details regarding his annual salary as of yet.

Ron stands at a height of 5 feet 11 inches and his weight is roughly 75 kilograms. He is blessed with good looks and has a slim and fit physique. His hair is black and his eyes are dark brown in color.

Get to know more about the lives of Chaz Marcus and King Von as well.