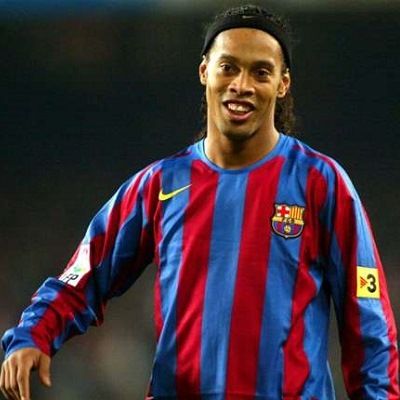 My game is based on improvisation. Often a forward does not have the time to think too much. You have a second, rarely more, to decide whether to dribble, shoot or pass to the right or left. It is an instinct that gives the orders.

I am ugly but what I do have is the charm.

Ronaldinho has dated Russian model, Irina Shayk in the past. In July 2002, it was reported that the Brazilian wizard had a fling with the English exotic dancer Lisa Collins. It was claimed that they had met during his visit to the Parisian club, where she used to work.

Likewise, he was linked with the Argentine model Ximena Capristo by the Argentine press. They were dating for quite some time and in her interview with the press, she claimed that they chated all the time, which was seen as a confirmation of their relationship.

Ronaldinho started dating dancer Janaína Mendes in 2002. He had first met her at Domingão do Faustão in Brazil. They got married on May 2004. In February 2005, she gave birth to their son, Joao, who was named after Ronaldinho’s late father. However, their marriage didn’t last long as he would later claim that marriage wasn’t for him.

In aftermath of Brazil’s embarrassing exit from 2006 World Cup, the Italian model Alexandra Paressant sold her story to the press, in which she claimed that Ronaldinho pulled out all night romps with her while at the world cup with his national team. She even claimed that he broke a few curfew rules for her. He threatened to sue her for making malicious allegations.

In 2010, the Italian media linked Ronaldinho with Italian actress and TV personality, Sara Tommasi. She herself gave an interview in December 2010 to confirm that they had been dating for about two months. However, their relationship didn’t last long into the following year. After breaking up with Sara, he dated Vanessa Tasquetto, a disc jockey in the year 2013.

Ronaldinho is a Brazilian football player. Likely, he is well known for being a member of the Brazilian team that won the 2002 FIFA World Cup. Also, he won the champions league with FC Barcelona. Currently, he is playing Fluminense. Additionally, he has won the FIFA Player of the Year in 2004 and 2005.

Ronaldinho was born on March 21, 1980, in Porto Alegre, Brazil. His birth name is Ronaldo de Assis Moreira and he is currently 39 years old.

His father’s name is João De Assis Moreira who was a shipyard worker who also played football for a local club and his mother’s name is Dona Miguelina Elói Assis Dos Santos who worked as a salesperson who later became a nurse.

Additionally, he inherited his father’s passion for football and started playing organized football as a small child. Unfortunately, his father whom he idolized died of a heart attack when Ronaldinho was eight.

In addition, he became an active participant in local youth club matches and acquired the nickname ‘Ronaldinho’ during this time. He first came into limelight when he scored all 23 goals in a 23–0 victory against a local team when he was 13.

Talking about his profession, he was selected for Brazil’s Under-17 national team and helped his squad win the FIFA Under-17 World Championship in Egypt. Additionally, Ronaldinho signed his first professional contract to play for Grêmio and made his senior side debut during the 1998 Copa Libertadores. He achieved considerable success playing for the team and helped them win the inaugural Copa Sul-Minas.

Likewise, he was a part of Brazil’s football team that won the FIFA World Cup in 2002. Whereas, he joined the FC Barcelona of the Spanish league in 2003 and won his first league title in 2004–05. He scored his 50th career league goal against Villarrea in November 2006.

Overall he enjoyed a very successful career with Barcelona and played his 200th career match for the team in a league match against Osasuna on 3 February 2008. His stint with Milan was not very successful and he joined Flamengo in 2011. In September 2014 he signed a two-year contract with the Mexican club Querétaro.

There was a rumor that Ronaldinho was going to get married to his two girlfriends, Priscilla Coelho and Beatriz Souza together in August. They are living together since December 2017. Both the women are living with the 39-year-old Ronaldinho like a family without any jealousy or miffs at his £5 million Rio de Janeiro mansion.

Ronaldinho has an estimated net worth of around $90 million and he has earned that sum of money from his professional career. He signed an endorsement deal with Pepsi soon after he caught the attention of the entire world with his sensational skills.

However, in 2011, he inked a deal with their rival Coca-Cola. He has also done endorsement work for the following brands as well Nike, EA Sports, Gatorade, Danone, Rexona, Trident Fresh, Minolta.

Sports can unite! A wave of joy, fun and hope flows through Pakistan as international football players visit the Nation for an exhibition match! Know the full details here!