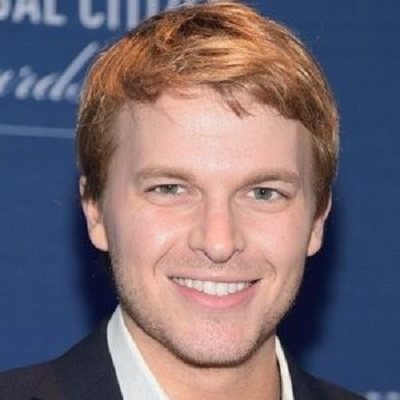 Ronan Farrow is engaged. His fiancee, Jon Lovett is a podcaster, and writer by profession. She is the host of Pod Save America.

The couple first started dating back in 2011. Later, in 2018, he came as gay. The couple got engaged back in 2019. He proposed Lovett with his book draft, Catch and Kill: Lies, Spies, and a Conspiracy to Protect Predators which consists of the proposal of Ronan.

As of now, they reside in the Lower East Side of Manhattan.

Who is Ronan Farrow?

American Ronan Farrow is a Journalist, lawyer, activist, and contributor writer. He is renowned as the host of Ronan Farrow Daily.

Last, in 2020, he appeared in the TV series, Good Morning America.

Ronan Farrow was born on the 19th of December 1987 in New York City, New York. His birth name is Satchel Ronan O’Sullivan Farrow.

His father, filmmaker, Woody Allen is of Jewish ethnicity whereas his mother, actress, Mia Farrow is of Catholic ethnicity.

He has two adopted siblings Moses and Dylan. Besides them, she has 13 half-siblings from his father and mother’s sides.

He attended the Center for Talented Youth and took courses skipping the grade school. Later, he joined the Bard College at Simon’s Rock. However, he took a transfer from the college to joined Bard College.

From the College, he earned a bachelor’s degree with Honors in Philosophy. During graduation, he was only 15 years old that made him the youngest person to graduate from the institute.

Later, in 2009, he received J.D from the Yale Law School. After that, he joined Magdalen College, Oxford, and studied Philosophy. At the time, he researched the subject, Exploration of Poor, and Developing Countries.

Back in 2001, Ronan Farrow became a Youth Spokesman for UNICEF. As a spokesperson, he advocated for the children and women of Sudan’s Darfur region. He continued the position till 2009.

During his days at Yale Law School, he worked with the law firm, Davis Polk & Wardwell as an intern.

In 2009, he became a special adviser for the Obama administration. At the time, he was involved in the Humanitarian and NGO Affairs. Also, he was a special representative for Afghanistan and Pakistan.

In 2011, Secretary of State Hillary Clinton appointed him as a special advisor in Global Youth Issues. He left the position in 2012.

After that, he started pursuing Journalism as his career. Also, he has contributed various editorial pages for newspapers like The Wall Street Journal, The Atlantic, and The Guardian.

Also, he started making an appearance in the TV programs like Ronan Farrow Daily, Today, and The View as host and correspondent.

Through his career as a Journalist, he has made a net worth of $12 million. His salary as a journalist and contributor is in the range of $3 million.

Along with his fiancee, Jon Lovett, he bought a house in Los Angeles in 2019 worth $1.87 million.

Till the date, he has not been through any sort of controversy that created a buzz in the media. Similarly, he has stayed far from any type of rumors too.