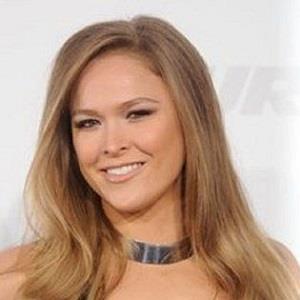 Sometimes I'm a much more energetic and embellished version of myself, but sometimes I do things just for a little extra flair. I'm doing what I need to do for the lifestyle that I want, and I feel like I'm putting enough positive things out in the world. And that's the best that I can do.

No matter how much you try or what you say, people aren't going to fully understand you or where you're coming from. You just have to get used to being misunderstood.

You call me arrogant? I say it's an accurate self-assessment because I work my ass off to be as good as I am at what I do and I'm proud of myself.

What is the relationship of Ronda Rousey?

The latest is that Ronda is on haitus from UFC to have a baby with Travis.

Previously in 2013, Ronda was dating Brendan Schaub, another mixed-martial artist, who is now retired.

After meeting the fellow martial artist, Timothy DiGorrio in 2012 in LA, California, Ronda Rousey dated him for a year.

Who is Ronda Rousey?

Ronda Rousey was born in Riverside, California on February 1, 1987, as the youngest of the three daughters of Ron Rousey and AnnMaria De Mars.

Her mother is a decorated judoka, and was the first American to win the World Judo Championship.

As a child, Ronda struggled with speech and could not form an intelligible sentence due to apraxia for the first six years of her life. And she was interested in the world of martial arts since childhood.

Furthermore, she belongs to a mixed ethnic background of English-Trinidadian-Grenadian-Polish-German-Scottish-Dutch ancestry.

Rousey was homeschooled for parts of elementary and high school life. Though she dropped out of high school, she did however complete her G.E.D.

Ronda Rousey was initially signed up with United States Olympic team at the age of 15, and at 16 she became the youngest American to earn the National No. 1 ranking in the women’s half-middleweight division.

Later, she went on to claim gold at the 2004’s World Junior and Pan American Judo Championships.

Next, she became the first American woman in 12 years to earn a World Championship medal by finishing second in the 2007 tournament..

She became a judo champion, winning back-to-back gold medals at the Pan American Championships and a 2008 Olympic bronze medal. Eventually, she retired from judo at the age of 21.

Rousey then worked as a bartender and lived out of her car for a spell in Los Angeles. She then joined the Glendale Fighting Club and in August 2010 made her amateur debut in mixed martial arts, a victory by way of an armbar after just 23 seconds.

Next, she became the first woman to sign up with the Ultimate Fighting Championship-the world’s largest mixed martial arts league in 2010, and earned fame as the UFC Bantamweight Champion.

Additionally, she successfully defended her belt in the inaugural UFC women’s bout in February 2012. Since then, she has been a dominant force in the women’s UFC.

She is also an active member of the WWE world.

Apart from her career in the fighting ring, Rousey is also an actress. She has 8 credits as an actress till date. Furthermore, she also has 2 credits as a producer.

-Rousey’s relationship with her ex-boyfriend attracted controversies after Rousey discovered that he had taken nude photos of her without her consent or knowledge.

-Additionally, after her fight to Amanda Nunes, she received numerous criticisms.