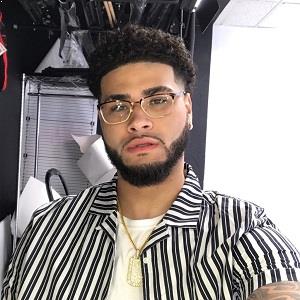 Ronnie Banks is currently in a relationship.

He began dating singer Jasmine Villegas after they met when he starred as the lead role in her music video for ‘That’s Me Right There’ in 2014. Jasmine announced on November 2, 2015, that she was six months pregnant.

Later, the couple welcomed a daughter named Ameera Reign Eloise Hackett on 19th February 2016 and in 2019 his second child Avayah Leilani Hackett. The pair got engaged on Christmas Day 2016. They moved into a new house on July 27, 2016.

Who is Ronnie Banks?

Ronnie Banks is an American model, popular Vine video creator and an actor. He is also a social media star and his YouTube channels are RonnieSwanks and IamRonnieBanks.

Ronnie was born in Oakland on October 20, 1997, as Ronald Smith Quincy Hacket III. Most of the information relating to his early life and childhood years are not available at present. He has a younger sister.

He is of American nationality. Furthermore, he belongs to a mixed ethnic background of Filipino and African-American.

He attended the University of Missouri-St. Louis.

Ronnie Banks posted his first Vine, appropriately titled ‘First Vine’ on May 2, 2013. Since then, he has been active on various social media sites like Instagram and Twitter.

Currently, he has more than 600k followers on Instagram. Additionally, his YouTube channel BANKS Family has more than 300k subscribers as of now. In addition, he has also modeled for several brands.

As an actor, Ronnie has 4 credits and has appeared in movies and television series  ‘Sally’, ‘Easy Hustle’, ‘Criminal Minds’ and ‘Miles Handy’. Ronnie’s name has not been linked with any award nominations to date.

He has not revealed his current salary. Similarly, his net worth is estimated to be $2 million.

Ronnie’s relationship with Jasmine attracted a fair amount of controversies after Jasmine tweeted about being cheated on before.

Additionally, she also posted some pictures on Twitter showing that he was talking to other girls and lying about it. Currently, there are no rumors concerning Ronnie and his career.

Talking about his body measurement, Ronnie Banks has a height of 6 feet 5 inches and weighs 70 kg. Furthermore, his hair color and eye color is black.

This media star is also active on Tik Tok with over 30k fans.