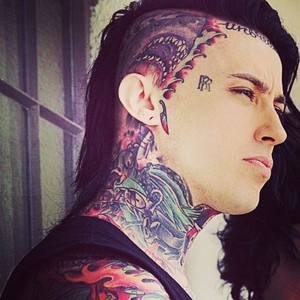 I we are born to die and we all die to live, then what's the point of living life if it just contradicts?

The best measure of success, is how you deal with failure

What is the relationship of Ronnie Radke?

Ronnie Radke has had 7 public relationships dating back to 2014. Looking at his dating history, he dates women 9 years younger than himself.

Radke was engaged to aspiring model Crissy Henderson before she broke off the engagement after Radke confessed to having an affair during her pregnancy. Ronnie and Crissy welcomed their daughter Willow Grace Radke on June 11, 2013.

Who is Ronnie Radke?

Ronnie Radke is an American singer, songwriter, entertainer, and record producer. Ronnie is a Frontman of Escape the Fate who, after his prison term ended, founded Falling in Reverse.

Ronnie is founding the member and current lead Vocalist, Keyboardist, and recent guitarist for the rock band Falling in Reverse and is the former vocalist and founding member of the Post-Hardcore band Escape the Fate.

He grew up in an impoverished family with his father, older brother Anthony and grandmother. Radke’s mother abandoned the family for unknown reasons, band, causing resentment towards her.

In childhood, Radke learned to play piano and guitar. He formed several bands while in High School. Ronnie ran away from school to play in his first band. He was very close to his friend Mitch called 3.0. He lived with Mitch and his mother for some time.

After the band, 26,2006 Radke moved back in with his dad and said that he dropped out of school, re-entered, then dropped out again.

On August 10, 2013, Ronnie’s brother Anthony was killed in a vehicle accident. The Falling in Reverse songs “Brother” and “Chemical Prisoner” were written in his memory.

The gig awarded them the opportunity to open a show on the band’s headlining tour with Alkaline Trio and Reggie and the full, which subsequently led to Escape the Fate’s record deal with Epitaph.

On Sep 26, 2006, the band released their first full-length album, Dying Is Your Latest Fashion, Omar left a year due to personal issues (I still mourn his loss).

Ronnie was asked to leave the band after he was sentenced in June 2008 for multiple run-ins with the law involving narcotics and battery for a fight that led up to the death of Micheal Cook.

After coming out of prison in December 2010, Ronnie started to form a new band (YAY :D) and first named it From Behind These Walls. The Band, now named Falling In The band releases two singles, “The Drug In Me Is You” and “Raised By Wolves” off Epitaph Records. The full-length album was released on July 26th, managed to sell 18,000 copies in its 1st week, and ranked at number 19 on the Billboard 200.

Ronnie still resides in Las Vegas, Nevada, and still thrives, to be one of the most legendary performers alive, with his signature squeak and stupifying screams.

Radke’s net worth is $4 million as of 2022, but there is no information about his salary.

There was a controversy, Ronnie and Max, best friends, got involved with drugs and started getting into fights. They ran into Micheal Cook and his friend/gang, who brought a gun. In defense of Ronnie, Max grabbed one of Cook’s friends and attempted to grab the gun out of his hand.

Unfortunately, the gun went off and accidentally shot Cook, leading to his death. Max, not knowing exactly what to do, ran off; leaving Ronnie on the ground as the cops came. And they arrested him for the “alleged murder” of Micheal Cook.

Ronnie was also on the rumor of a rape accusation from a 25-year-old Salt Lake City woman, Kacee Boswell.

After claiming all these allegations to be false, Radke decided to file a defamation lawsuit against the accuser.

He has a height of 6 feet 1 inch with a body weight of 85 kg. He has black hair color and his eye color is dark brown.

Also get to know more about the birth facts, education, career, net worth, rumors, height, and social media of different personalities like Charlie Pride, Kayden Boche, and John Mayer.