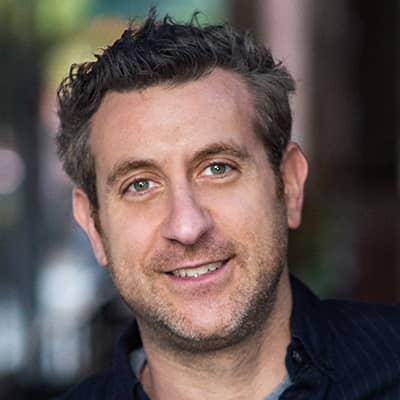 Rory Albanese’s current relationship status is possibly single. He has not shared details about his wife, girlfriend, or affair.

But in Nov 2020, Sarah Silverman said she dated Rory on a SiriusXM radio show. As per the sources, he was also married to Jennifer Flanz.

Who is Rory Albanese?

Rory Albanese is an American comedian, writer, and TV producer. He is mostly known for being the lead writer plus producer of a show named The Daily Show with Jon Stewart.

He was born on 29 May 1977, in Rockville Centre, New York. The name of his father is unknown and his mother’s identity is also not revealed.

Moreover, his ethnic background is Caucasian and he has enrolled at the College of Communication at Boston University.

From there he graduated in 1999 and got his degree.

Rory Albanese joined the late-night show titled The Daily Show with Jon Stewart in 1999. As a writer plus producer, he remained with this show till 2013. This show is still running on Comedy Central. In the same network, in April 2010, his own comedy show was aired.

He also joined Lewis Black in 2006. With him, he performed in the Red, White, and Screwed tour. This comedian also became an executive producer of another talk show Strahan, Sara & Keke which was aired on ABC.

Furthermore, as a producer, he was associated with shows like The Nightly Show with Larry Wilmore and The Approval Matrix.

This writer has an estimated net worth of $1 million as of the year 2020. But his salary and other earnings are unknown.

As per the records, the net worth of some of the popular comedians are,

This star at present is keeping himself away from rumors. Moreover, this comedian is also away from any desperate scandals.

But he was arrested for beating a 9/11 truther in 2010. That person was abusing Rory.

Regarding Rory Albanese’s body features, his height and his body weight are unknown. Moreover, the color of his eyes is hazel and his hair is also dark brown in color.