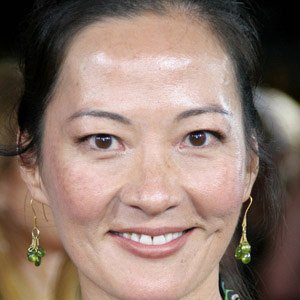 [about Colm Meaney] I adore Colm. We're old friends by now, so that's great. Also, we bicker like a real husband and wife do.

[on filming a scene in the Star Trek: Deep Space Nine (1993) episode "Times Orphan"] We were shooting at Griffith Park when we were doing the picnic scene. I had some speech to make, and I noticed people talking behind the camera, which was very unusual because the "Deep Space Nine" crew was very professional. And I noticed people moving around. It turned out that a rattler had been, like, this far away from me, as we were shooting. And nobody cut and had me move! Colm [Colm Meaney] just got up and got out of the way, they got the kid out of the way, and nobody said word one to me! Can you imagine?

[on how the "ST:DS9" producers let her do The Joy Luck Club (1993) before committing to the series] I'm very grateful to the "Star Trek" people because they made it possible for me to participate in a movie that really made a difference to Asian-Americans, and it made a difference in my life as well.

Rosalind Chao is a married woman. She has been married to voice actor Simon Templeman since 1989. Simon is known for voicing the character Kain in the Legacy of Kain video game series. The couple has welcomed two children: Roland William Templeman(born September 1, 1992, in Los Angeles) and Isabelle. The family is living together and there is no sign of divorce between the couple as well.

Who is Rosalind Chao?

Rosalind Chao is an American actress. She is best known for her role as a star of the CBS show ‘AfterMASH’ in which she portrayed Klinger’s South Korean wife Soon-Lee Klinger. She is also well known for her performances in ‘Just Like Heaven’ in 2005, ‘Freaky Friday’ in 2003, and ‘What Dreams May Come’ in 1998.

Rosalind was born on September 23, 1958, in Anaheim, California. She was born as a first generation Chinese American. She is currently 60 years old. Rosalind’s father immigrated to the U.S. from Shanghai, China.

Her parents ran a pancake restaurant, Chao’s, across the street from Disneyland. She employed there from an early age as an international tour guide.

Chao holds American citizenship and her ethnicity is Chinese.

Talking about her education history, she was enrolled at an all-girl school, and she was the only white student in the school. Also, she enrolled in the communications department at the University of Southern California and she completed Bachelor degree in journalism from there.

She was involved in a California-based Peking Opera traveling company for which she got support from her parents. Later, she was sent to Taiwan to further develop her acting.

She began appearing in television from the CBS sitcom ‘Here’s Lucy’ but she was first noticed in another CBS sitcom named ‘Anna and the King’. Then, she took a break from acting and completed her Bachelor’s degree. Then, she spent a year as a radio news writing intern and returned to acting.

Recently, she appeared as Dr. Andrews in ‘Stockholm, Pennsylvania’ in 2015, and as Mayor Campbell in Tragedy Girls’ in 2017. She will be appearing in ‘Mulan’ and ‘The Laundromat’.

It seems Chao has been successful in maintaining her celebrity status and has not been involved in any types of rumors and controversies in her career.

She has a height of 5 ft. 7 inches and weighs 69 kg. Rosalind has dark brown eyes and black hair. Information regarding Chao’s body measurement, shoe size, dress size, etc. are under review.