Rosamund Pike is an Empire award-winning actress. Rosamund is dating a mathematician-businessman, Robie Uniacke and has two kids. 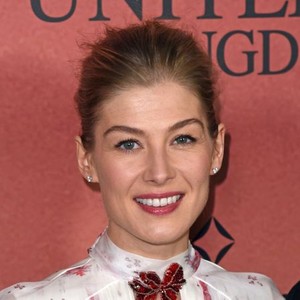 I think you can make a choice with that kind of thing. You can certainly keep a low public profile if you want to

I'd love to say I was the kind of person who has an outline. But the only outline I have is that I want to carry on doing this all my life.

What is the relationship of Rosamund Pike?

Talking about her relationship, she is dating Robie Uniacke since 2009. Her partner Robie is a mathematician and a businessman. She met Robie at a private party. The couple has two children namely, Atom Uniacke, Solo Uniacke. They reside in a Georgian townhouse in Islington.

Previously, she was a married woman. She was in a relationship with Simon Woods in 1998, They appeared in the 2005 movie Pride & Prejudice (2005), but the relationship didn’t go well so they decided to separate in 2002.

Likewise, she was in a relationship with Jamie Theakston in 2003,  they were introduced by a mutual friend but they decided to break up.

Moreover, she was in a relationship with Joe Wright in 2005, after dating for a couple of years, the couple engaged in August 2007. The couple was set to marry in 2008 but they didn’t get married.

Who is Rosamund Pike?

Rosamund Pike is an English actress. She is well known as Rosamund Mary Ellen Pike.

Rosamund is 43 years old. She was born in Hammersmith, London, England on January 27, 1979, to parents Julian Pike(father) and Caroline Friend(mother).

She belongs to British nationality and English ethnicity. Her birth sign is Aquarius. Talking about her education, firstly, she attended Badminton School. Then, she attended Wadham College. Finally, she attended Oxford University.

Talking about her profession, during 2001, she was offered a role in a James Bond film, ‘Die Another Day’ as a ‘Bond’ girl alongside Pierce Brosnan.

Likewise, she also appeared in nothing else but high-heeled shoes. In 2004, she also played an important role in ‘The Libertine’ that starred Johnny Depp.

In 2005, she also played the part of ‘Jane’ alongside Keira Knightley who played the character of ‘Elizabeth’ in ‘Pride and Prejudice’.

Whereas, in 2007, she also acted alongside Anthony Hopkins and Ryan Gosling in ‘Fracture’. Likewise, in 2012, she appeared in the fantasy epic ‘Wrath of the Titans’.

In the same year, she also played the lead role opposite Tom Cruise in the movie ‘Jack Reacher’. The film was a critical and commercial success.

Likewise, she also performed in a supporting role in her next film ‘The World’s End’ (2013) too received critical acclaim.

Besides that, her career reached new heights when she appeared opposite Ben Affleck in the 2014 thriller ‘Gone Girl’ based on the novel of the same name by Gillian Flynn. He.

Whereas, her recent films include ‘Return to Sender’ (2015), a psychological thriller; ‘The United Kingdom’ (2016), a British biographical romantic drama film; ‘The Man with the Iron Heart’ (2017), as well a biographical war drama-thriller; and ‘Hostiles’ (2017), an American Western.

In 2018 her two films have already been released, ‘Seven Days in Entebbe’ based on the 1976 dramatic rescue mission of the ‘Air France flight, and ‘Beirut’, an espionage thriller film set in the 1982 Lebanese Civil War.

Hence, her upcoming films include ‘A Private War’, a biographical drama in which, Rosamund plays the character of journalist Marie Colvin.

In 2019 will see the release of ‘Three Seconds’, a British action crime thriller film adapted from the book of the same name by Roslund/Hellstrom.

Likewise, she won the Empire Award for Best Newcomer for Die Another Day (2002), she received an award for British Actress of the Year for What We Did on Our Holiday (2014).

There is no information regarding her salary. As per 2022’s data, her net worth is around $6 million.

There was a rumor that Rosamund Pike was dating the personalities like Robie Uniacke, Joe Wright, Jamie Theakston, Simon Woods. Currently, there are no rumors and controversies related to her personal and professional life.

Talking about his body measurements, Rosamund has a height of 5 feet 8 inches. Additionally, she weighs is 59 Kg.

Similarly, she has a measurement of 35-24-35 inches respectively. Rosamund’s hair color is blonde and her eye color is blue. Furthermore, her shoe size is 7 (US) and her dress size is 4 (US).