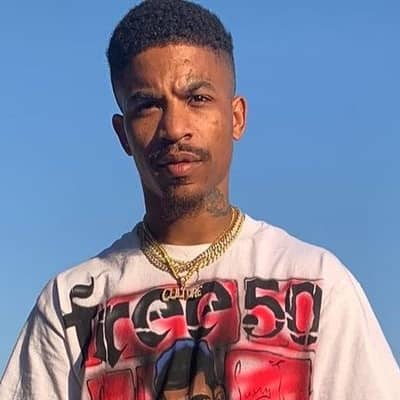 Rose Burgundy currently appears to be single. He doesn’t seem in any love affairs as of now.

Previously, he has been in a relationship with Hazel E. Hazel is one of the popular rappers and also the cast member of the hit VH1 tv series ‘Love & Hip Hop: Hollywood.

The couple started dating in back 2016. At that time, Rose was just 18 years old whereas Hazel was 36 years old. Due to the vast age differences, the couple faced lots of criticism and judgment regarding their relationship.

However, the couple did not last long and get separated in 2018. But, his then-girlfriend is married as of now. She gets married to De’Von Waller.

Who is Rose Burgundy?

Rose Burgundy is renowned as an American reality star and television personality. He is best known for appearing on VH1’s Love and Hip Hop: Hollywood.

He is better recognized as the ex-boyfriend of popular rapper Hazel E.

The rapper was born on February 15, 1998, in Los Angeles, CA. As of 2021, he is 23 years old. His Zodiac sign is Aquarius. He holds an American nationality and is of African-American descent. His birth name is Denzell Young.

Rose is very secretive regarding his personal life so, he hasn’t yet disclosed his parent’s and sibling’s details to the public. However, Rose is an animal lover and he has also a dog named Angel.

As per other online sources, he spends most of his teen years on the streets and in and out of jail. Similarly, his academic history is also not available.

In 2017, Rose came into the limelight after he appeared in the fourth season of the VH1’s ‘Love and Hip Hop: Hollywood’ alongside his ex-girlfriend Hazel-E.

The show premiered on July 24, 2017, and it consists of 16 episodes, including a two-part reunion. But, he banned from the fourth season’s reunion because he allegedly threatening Ray, Booby, Zell, Safaree over the internet. Currently, he is the co-owner of Dancer & Night Club.

Rose arrested numerous times for various purposes like firstly accused of burglary, then of drug possession, driving a car without a permit, and more. In June 2017, he caught with a  gun and he was taken into custody for three years.

Burgundy criticized by his fans on Twitter after he posts a picture of a rainbow flag-burning with the caption that gays should burn in the heel.

He shows such mischievous behavior on social media because some of the LGBT community people accused him of being gay. However, he later apologized to them and deleted the tweets.

He has offscreen disputes with the Sincere show and also had an online fight with Tammy Rivera after calling her fat.

Rose might have earned a handsome amount of fortune throughout his career. But, he hasn’t yet revealed the exact figure of his net worth, salary, and yearly income.

The rapper stands at the height of 5 feet 6 inches tall and weighs around 72 kg. He has black hair color with black pair of eyes as well.

He has tattoos on his different parts of the body like on the finger, hand, neck, and so on. Moreover, his other body measurement is not available.