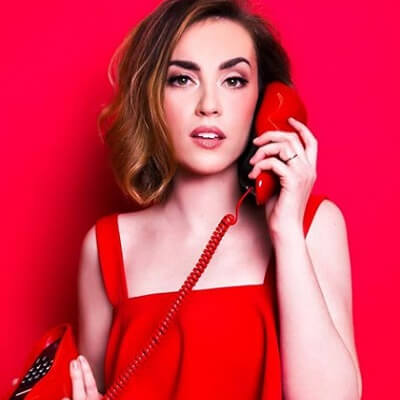 Rose Ellen Dix is a married woman. She is married to Roseanne Elizabeth “Rosie” Spaughton. The couple first met in 2007 at a Halloween party. However, both of them were seeing different people at the time. After their relationships ended, the went on a date on October 20, 2011. Since then, the couple has been in a loving and inspiring relationship.

On May 30, 2014, the couple got engaged. Less than a year later, they exchanged wedding vows on March 20, 2015, at Clearwell Castle in England. Her wife, Rosie is bisexual.

In April 2019, the couple revealed they had picked the surname, Daughton as their joint married name. Currently, they live in Hertford, England with their dog, Wilma, and cat, Flynn.

Who is Rose Ellen Dix?

Rose Ellen Dix is a British Youtuber, social media personality, and comedian. She is part of the duo, ‘Rose and Rosie’. The couple is married and posts videos on their YouTube channel which has gained more than 915k subscribers.

Rose Ellen Dix was born in Ross-on-Wye, Herefordshire, the UK on June 15, 1988. As of 2020, her age is 31. She grew up in Worcestershire with her parents and her two siblings, John and Laura. However, she has not revealed the identities of her parents.

By the time she was 16, she came to know that she was gay and came out to her sister who was very supportive. However, her mum did struggle a bit in the beginning. She revealed that her mother was scared of how people might treat her.

Talking about her education, Rose attended Hereford College of Arts where she studied Film and Screen Media.

In 2014, Rose left her job at Apple Store in Worcester and became fully active as a YouTuber. Rosie’s personal channel’s name was also changed after the couple decided that they would be putting out their vlogging content there. They renamed the channel, ‘Rose and Rosie Vlogs’ and started uploading vlogs and various series including #RealTalk, annual VLOGMAS videos, and the BISEXY SERIES. In the #RealTalk videos, the couple talked about real-life conflicts and situations employing their personal experiences and advising their viewers.

On their main channel, they upload couch comedies and film challenge, guide, and gaming videos. Throughout the years, they have collaborated with several famous YouTubers including Hannah Hart, Shannon Beveridge, and Oli White.

The pair also set up ‘Let’s Play Games’ on April 29, 2016. They have created the channel solely for videos playing games like Until Dawn, FIFA, GTA 5, and The Sims 4. On their main channel, they have around 915k subscribers.

Rose has come up with an alter ego of herself called Maltese who is an elitist character that claims to be of Canadian Island royalty. She makes appearances in ‘This is Just Ridiculous’ and ‘Superkiss Part 3‘.

The couple together has been featured on the series ‘The Internet Takeover’, and the reality series ‘Stupid Man, Smart Phone’. In June 2016, the couple interviewed Melissa McCarthy and Paul Feig promoting their movie, ‘Ghostbusters’.

Rose Ellen Dix has an estimated net worth of around $250k. Also, from her YouTube channel, she earns around $50k-$8ok per year.

Rose stands at a height of around 5 feet 6 inches. She weighs around 64 kg. Also, she has brown hair and blue eyes. However, there is no information about her shoe size, dress size, bra size, etc. Similarly, she has not revealed her body measurements for breasts, waist, and hips.