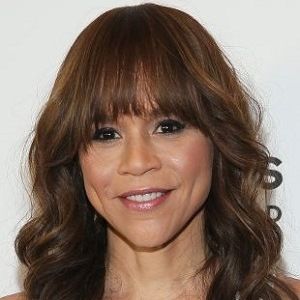 Most of the criticism I got early in my career was from the Latin community. They used to take me out to lunch and tell me, "Can you go and take lessons to lessen your accent?". Or, "When you're on a talk show, can you not be so funny and loud?". People gave me so much crap about my voice, and I tried. I really did try to change, but it was the way I spoke. As I got older, the octaves dropped, thank God. Now I find it flattering if a sixteen-year-old comes up and starts imitating me.

Boxing is about pushing through your fears. It's more about fighting yourself. Floyd Mayweather could get punched - like clean shot down the middle to his face - and he wouldn't flinch. And I understand what he's doing.

Don Cornelius did not want to see how I really danced - I was doing hip-hop, and it was foreign to people out in California. They only knew about popping and locking, so they were not keen on hip-hop dancing. Don was like, "No, no, no. You're a girl." I was like, What? This is really weird. Then I had to dance in high heels, and I never danced in high heels before, and I had this little tiny short dress, and it's riding up my ass and I'm like, Oh my God. I couldn't move. As you can see from the tapes, I had absolutely no style whatsoever on that show. The first couple of times, I didn't know what the hell I was doing. I was just excited and nervous and scared and just elated. That was my style. A bunch of nerves just oozing out of my body.

Rosie Perez was in a relationship with Tupac Shakur (1993) an Afro-American rapper, had a surprisingly short career as he passed away at a very young age of 25 in 1996.

After that, Rosie and actor Christian Slater had a short encounter from February 1993 – June 1993 and were possibly spending time together as per the mentioned timeline. Their stint was for only 4 months.

Moreover, she was in a relationship with Seth Zvi Rosenfeld a filmmaker, and playwright who dated her for a year and then got married in the year 1999. Their marital bliss stayed on for two years post which the couple parted ways in 2001.

Perez has been romantically linked to “The Wire” actor Ramon Rodriguez in the past. The actress got married to artist Eric Haze on September 15, 2013, in Las Vegas. Apart from being an artist, Eric is a graphic designer too.

Who is Rosie Perez?

Rosie is a famous American writer, actress, community activist, talk show host, author, dancer, and choreographer. Luck struck her at a farewell party when she was approached by director-producer Spike Lee for a film. Appreciated for her debut performance in the movie ‘Do the Right Thing’, she later starred in several hit films such as ‘White Men Can’t Jump’ and ‘Fearless’.

Rosie Perez was born in Brooklyn, New York, the United States on September 6, 1964. Her birth name is  Rosa María Perez and she is currently 54 years old. Her father’s name is Ismael Serrano (merchant marine) and her mother’s name is Lydia Pérez (singer).

Her mother suffered from schizophrenia and though she visited Perez often, she couldn’t fill the void in her life. Her mother died years later due to complications from AIDS. The early traumatic experiences of her childhood included abuse and abandonment, she suffered a speech impairment that added to her already existing ordeals.

She has a sibling namely, Carmen Serrano. Rosie holds American citizenship and Puerto Rican ethnicity. Her birth sign is Virgo.

Talking about her profession, in the year 1989, the world saw the talented Perez in the film ‘Do the Right Thing’. Her breakthrough got her several roles the following year including the TV movie ‘Criminal Justice’ and television show ’21 Jump Street’ and ‘In Living Color’.

In the year 1992, she starred in the movie ‘White Men Can’t Jump’ as Gloria Clemente and as Cyndi in ‘Untamed Heart’. On the following year, she was cast in one of her most outstanding performances in the movie ‘Fearless’. Additionally, she appeared as Muriel Lang in the Hollywood film ‘It Could Happen to You’ and also played Mercedes in ‘Somebody to Love’. She also became a voice actor with her role as Thumbelina in ‘Happily Ever After Fairy Tales for Every Child’.

During 1997 it was an eventful year for her; she starred in the movie ‘A Brother’s Kiss’ as Debbie, and as the title character in the movie ‘Perdite Durango’. In addition, she played Grace Santos in the movie ‘The 24 Hour Woman’ and was the voice of Chel in ‘The Road to El Dorado’. In 2003, she narrated the sequences in the movie ‘From the 10th Floor’.

Besides that, she was also seen in a guest appearance on the TV series ‘Frasier’. She starred in the positively reviewed television movie ‘Lackawanna Blues’ as Bertha in 2004. By 2005, she starred as Ruthie in ‘All the Invisible Children’. The same year, she became extremely popular voicing ‘Click’, on the animated children’s educational program ‘Go, Diego Go!’ until 2008.

In the year 2009, she appeared in the TV series ‘Law & Order: Special Victims Unit’ and until 2012 starred in guest roles in shows such as ‘The Cleveland Show’ and ‘Nurse Jackie’. In the year 2012, she acted in two hit films; the first was as Ms. Baker in the comedy film ‘Small Apartments’.

During 2014, she played the voice of Red in ‘The Hero of Color City’ and starred in ‘Fugly’ as Zowie and played herself as ‘The View’ host in ‘Pitch Perfect 2’. She was announced as the new co-host of the TV show ‘The View’ alongside the legendary Whoopi Goldberg but decided to leave the show in 2015.

On the same year 2014, she published a book accounting her unfortunate childhood titled ‘Handbook for an Unpredictable Life: How I Survived Sister Renata and My Crazy Mother, and Still Came Out Smiling’. After her recurring role in the 2016 TV series ‘Search Party’, audiences watched her as a guest performer on the TV shows ‘Pure’ and ‘Nightcap’ in 2017.

She has an estimated net worth of around $12 million (as per 2019 data) and she has earned that sum of money from her professional career.

There was a that Rosie and Tupac Shakur were in a relationship in 1993 and parted ways the same year. Currently, she is far from rumors and controversies.

Also, read the affair, salary, the net worth, controversy, and the bio of  Sophie Von Haselberg, Debbie Allen, Emma Portner