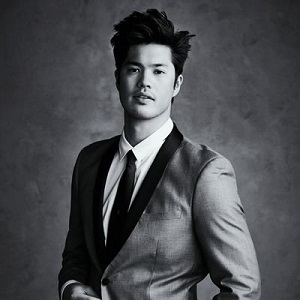 My mom just wanted me to do anything that was academic, whether it was become a doctor or be a lawyer. Engineering suited her... then I dropped out. It was not what I wanted to do at all

it just felt so unnatural, and I couldn't put my finger on why. I just knew it wasn't for me

I'm not the Asian kid of 'Riverdale

' I'm Reggie, and I just happen to be Chinese.

Ross Bulter has kept her personal life private. He usually doesn’t talk about his private life in the media and public.

Who is Ross Butler?

Ross Butler is an American actor plus a model who was seen in 13 Reasons Why and films Teen Beach 2, and Perfect High.

He was born as Ross Fleming Butler on 17 May 1990 in Singapore. He is the only son of a British-Dutch father and a Chinese-Malaysian mother.

His ethnicity is a mix of English and Asian. He has a sibling named Jalynn.

He had completed his high school from Langley High School.

He enrolled at Ohio State University in 2008 but left after one year. He joined it to study Biomolecular and Chemical Engineering.

Ross Bulter started his acting career in 2010 when he had moved to Los Angeles. He kept his first footsteps on the television in 2012 where he played the role of Allen in The Gateway Lifetime. In 2013, he appeared in the movie Work It Out.

In the same year, he had played in two television films, Major Crimes and Camp Sunshine. Then in 2014, he had played two movies as well as four television series, Two bedrooms, Rules of the trade, Star Seed, Hollywood, Dog Park, and Happy land.

Similarly, he had played in the movie Hacker’s Game as well as a television film, Perfect high, Teen Beach 2, and Chasing Life in 2015.

His latest movie is To All the Boys: P.S. I Still Love You (2020) as Trevor. He is currently busy with TV series 13 Reasons Why.

In it, Ross is playing the character of Zach since 2017. This show is a teen drama and is aired on Netflix.

Unlike other celebrities, Ross hasn’t suffered from any kind of rumors and controversy. Through the sources, there aren’t any rumors or controversy published.

This actor has an estimated net worth of $500 thousand. His movie Flavors of Youth (2018) has crossed over 2.8 million yen in the box office.

Regarding Ross Butler’s body features, he has dark brown eyes and black hair.

Ross Butler’s social media account is active. He has around 8.6 million followers on Instagram with around 899 posts.