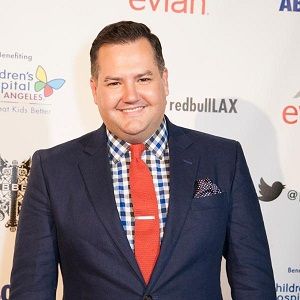 If you want to succeed at any job, make yourself invaluable. Go the extra mile

My guilty pleasure is elastic-waisted pants. And reruns of shows I've already seen 400 times on TV.

What is the relationship of Ross Mathews?

Since 2008, he was in a relationship with Salvador Camarena who is a celebrity stylist and fashion correspondent.

Both were featured together in ‘House Hunters‘. However, in late 2018, this couple broke up.

Who is Ross Mathews?

Ross Mathews is an American television artist. He is extremely prominent as a correspondent for “The Tonight Show” with Jay Leno, as a “Ross the Intern”.

He has made a recognizable position on television and able to gain more fame and fans. Currently, he is working on three shows including Hollywood Today Live, RuPaul’s Drag Race, and Live from E!.

Ross was born to American parents on September 24, 1979, in Mount Vernon, Washington. His nationality is American and is of Caucasian ethnicity.

Rather than playing and traveling, he used to watch different television shows regularly which really helped him to adapt while making a career on television.

Talking about his educational background, he attended the University of La Verne in La Verne, California, and graduated from there with a degree in communication. He was one of the best speakers and debate competitors while at University.

After getting a degree Ross Mathews did an internship on The Tonight Show with Jay Leno behind the scene. He also did commentary for the E! Entertainment Television and started appearing as a weekly panelist on E’s late-night talk show “Chelsea Lately”.

He was able to collect some fame after appearing on the fifth season of VH1’s reality television show, ”Celebrity Fit Club”.

In the year 2009, he co-hosted “GSN’s Big Saturday Night” and also appeared on “The Howard Stern Show” and the 2009 “Game Show Awards” in the same year.

He also worked as a regular judge for the 7th season of RuPaul’s Drag Race along with Carson Kressley. Ross started appearing as a guest host on Hollywood Today Live in the year 2015.

He has made a respectable position in the television field being an entertainer and also makes a handful amount of money from there. As of 2022, his net worth is estimated at $2 Million.

He is a hard-working person and is doing his best in every show to be on the front line.

Ross is constantly plagued with gay rumors after his affair with Salvador Camarena. He used to talk in the high-pitched female voice which only added to this rumor.

Ross Mathews is 6 feet tall. He is heavyweight but the exact figure is not known. He had dark brown hair and dark brown eyes.