Ross Pearson is happily married to his Australian wife, Kristie Jane Mckeon who used to work as a ring girl. They both met at UFC in 2011 and started dating each other since then.

Finally, in September 2014 they got married after a long year of dating. Also, Pearson moved to Australia to be with his wife.

They are blessed with two daughters, Gracie and Elle. 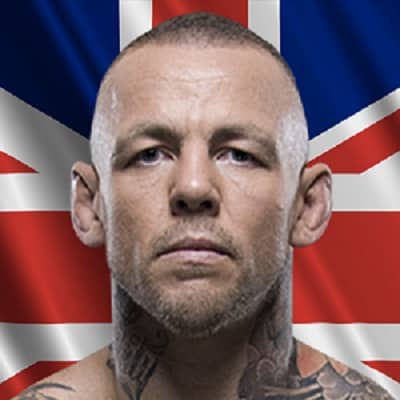 Who is Ross Pearson?

Ross Pearson is a professional Mixed Martial Artist originally from Sunderland, England. He was a three-time “Fight of the Night” winner and was the lightweight winner of The Ultimate Fighter 9.

He was molded to be one of the best mixed martial artists at the age of 17.

Also, he battled in the lightweight division of the Ultimate Fighting Championship, holding a record of 12-13 (1 NC) with the organization.

In addition, he is famous for his powerful punches. His favorite grappling technique is the armbar. Pearson has stated that his hero is Randy Couture.

Pearson joined the University of Sunderland, Park View School, Chester-le-Street where he started training in martial arts and boxing. Moreover, Ross has not mentioned the name of his parents and relatives.

Pearson a celebrity MMA Fighter, first appeared on the tv reality show The Ultimate Fighter: the United States vs the United Kingdom where he won the fight and placed first in the lightweight division in 2009.

Ross fought against Dennis Siver at the event of UFC fight night: Florian vs Gomi at Charlotte, US, and won the title of Fight of the Night on March 31, 2010.

Later, he fought three matches in which he won the fight and lost one match against Edson Barboza in 2011.

In 2012, Pearson was confirmed as the Team UK coach for The Ultimate Fighter: The Smashes. He won the fight by an early third-round TKO.

Pearson faced Melvin Guillard at UFC Fight Night 30 on October 26, 2013, where the fight ended in a no contest as Pearson was unable to continue after being cut on the forehead by an accidental illegal knee.

On 2014 June 7, he competed with Diego Sanchez via Split Decision but that decision was not correct so he appealed with New Mexico Athletic Commission to re-arrange the match as the rule of UFC. Later UFC president Dana compensated Pearson $30,000 as an unofficial win bonus.

In 2015, Pearson competed for a three-match where he won two fights against Sam Stout and Paul Felder and lost one fight against Evan Dunham.

In 2016, Pearson was expected to face Abel Trujillo on 20 March at UFC Fight Night. However, Trujillo was removed from the card on 12 March due to alleged visa issues that restricted his entry to Australia. As a result, Pearson faced Chad Laprise and won the match via split decision.

In 2018, Pearson was expected to battle in the fight against Joseph Duffy. However, Pearson announced that he was out of the bout due to a broken nose and subsequent surgery to correct the injury.

In 2019, Pearson faced Desmond Green on March 30, 2019, at UFC where he lost the fight via technical knockout in round one. In addition, Pearson announced his retirement on April 8, 2019.

There is no detailed information about his salary and income. As per sources, Pearson has a net worth of around $200 thousand.

Pearson competed against Diego Sanchez on 7 June 2014. Despite outstriking Sanchez, in every round, he lost the fight against him via a split decision, somehow the decision was not appropriate.

Then, Pearson appealed to the New Mexico Athletic Commission, “in hopes the decision is overturned, at the very least to a no-contest.” However, the official decision remained the same.

Pearson has a muscular body with a height of 69.6 inches and weighs around 70kg.

He has a pair of brown eyes and brown hair. Besides this, there is not any information regarding his other body measurements.

Ross is active on Instagram with more than 65k followers under the username @rosstherealdeal.

Similarly, he has more than 85k followers on Twitter. He is also active on Facebook with more than 45k followers.

• His wife is an Octagon Girl of UFC.

Click on the link to find more about KGB Andrea Lee, Kit Cope, and Jorge Masvidal.