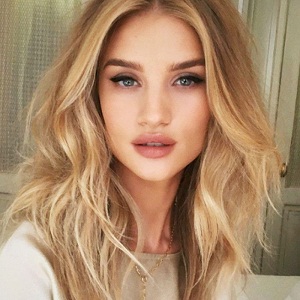 I don't even think when I'm walking down the runway. I don't really breathe either

Hopefully I'll get to make another movie, so we'll see. But modeling - all the actresses are taking everything over now, with all the modeling endorsements and magazine covers

Well, it's a day-to-day thing. I don't feel comfortable in my body today at all. Any woman will tell you she has her good and bad days and today I did not feel like I looked my best or felt radiant inside or outside.

In the past, she has been romantically linked to actor Olivier Martinez. She also dated Tyrone Wood, son of Rolling Stones’ member Ronnie Wood, from 2007 to 2009. She is currently dating action film star, Jason Statham. In 2016, her representative confirmed they had become engaged.

Who is Rossie Huntington?

Rossie Huntington-Whitely is an English model and actress.  She is best known for her work as a Victoria’s Secret. She has acted in the movies, 2011 film Transformers: Dark of the Moon, the third installment in the Transformers film series, and as The Splendid Angharad in Mad Max: Fury Road (2015).

Rossie Huntington-Whitely was born on April 18, 1987, in Devon in England, UK. Her nationality is English and ethnicity is mixed(Jewish and English).

She is the daughter of Fiona, a fitness instructor, and Charles, a chartered surveyor. Rosie’s paternal grandmother, Gillian, also from a Jewish family, was the daughter of Jacob Franks, a prominent surgeon in Sussex.  She grew up on a farm near Tavistock, Devon.

Educated at Tavistock College, she later revealed that she was bullied and teased at school for having a double-barrelled name, small breasts and full lips.

She got her first big break in January 2004 when she traveled to New York City for a shoot with Teen Vogue. She later made her Catwalk début alongside Naomi Campbell in New York City in spring 2004 and was then photographed by Bruce Weber for Abercrombie & Fitch. In early 2006, she was signed to American lingerie brand Victoria’s Secret, making her debut at the brand’s 2006 show in Los Angeles. She also made the cover of British Vogue for the first time in 2008.

More high-profile work soon followed, including starring in a short film for the risqué lingerie line Agent Provocateur in 2009. News broke in 2010 that Huntington had landed a plum role in the big budget action flick Transformers: Dark of the Moon. She had been brought to replace Megan Fox as Shia LaBeouf’s love interest in this third installment of director Michael Bay’s film franchise. Handling some of her own stunts, Huntington-Whiteley got numerous bumps and bruises while making the physically demanding movie.

She also had to learn to run in heels to escape from all of the on-screen calamity. Even before the film’s release, Huntington-Whiteley enjoyed a new-found celebrity status. Rossie earned two unique honors in the spring of 2011. She topped Maxim magazine’s Hot 100 list and the readers of Britain’s FHM magazine voted her in as number one in their list of the world’s 100 most beautiful women.

While largely loathed by critics, Transformers: Dark of the Moon was a huge box office hit during the summer of 2011. The film raked in more than $1 billion worldwide. Huntington-Whiteley was on the receiving end of some less-than-kind reviews for her acting debut as well. One CNN reporter said that Huntington-Whitely made “Megan Fox look like Meryl Streep.” Returning to modeling, Huntington-Whiteley helped Burberry launched their new fragrance Body in the fall of 2011.

She also appeared in a campaign for the British retailer Marks & Spencer with actor Ryan Reynolds around this time.  In 2013, she starred alongside Helena Bonham Carter and David Gandy in the Marks & Spencer. In 2014, Paige Denim announced Huntington-Whiteley as their ambassador for their upcoming Spring 2015 ad campaign.

Her net worth is $ 5 million but her salary is not revealed yet.

According to rumors, those pregnancy rumors swirling around Rosie Huntington aren’t going away anytime soon.

Rossie Huntington has a height of 5 feet 9 inches. Her body weighs 54k. She has blond hair and blue eyes. Her body measurements are 34-25-35 inches. Furthermore, her bra size is 32B, dress size is 2 US and shoe size is 10 Shoe size is 10US.