He has won BAFTA for Best Entertainment Performance in 1981.

Rowan Atkinson married Sunetra Sastry in early 1990 after a long dating relationship. They are blessed with a son ‘Benjamin’ and a daughter ‘Lily’. Their 34 years long gap relationship ended in 2014 and divorced finalized on 10th November 2015.

Atkinson started dating an actress, Louise Ford in 2014. According to some news, they met each other for the first time in 2012. They have a huge age gap of 29 years and they are still enjoying their relationship. His girlfriend, Louise was pregnant in early 2017 and gave birth to their baby in December 2017. The pair was spotted together at the birthday of Andrew Lloyd Webber on 28th March 2018. 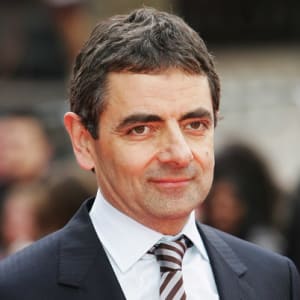 “People think because I can make them laugh on the stage, I'll be able to make them laugh in person. That isn't the case at all. I am essentially a rather quiet, dull person who just happens to be a performer.”

Who is Rowan Atkinson?

Rowan Atkinson is an English actor, screenwriter, and comedian. He is best known for his role in ‘Blackladder’ and ‘Mr. Bean’. He has won BAFTA for Best Entertainment Performance in 1981. He is listed as one of the 50 funniest actors in British comedy by ‘The Observer’.

His family follows the Atheist religion. He has three siblings. Unfortunately, his brother, Paul Atkinson died when an infant. His other two brother’s names are Rodney Atkinson and Rupert Atkinson.

He used to run a series of comedy shows for BBC Radio 3 called ‘The Atkinson People’ where he used to take satirical interviews with the fictional great man.

Atkinson played a one-off pilot for London Weekend television in 1979 called ‘Canned Laughter’ and he played in ‘Not the Nine O’Clock News’ for the BBC. The success made him a path to the lead role for ‘The Black Adder’ in 1983.

The fortune changer role of Atkinson is ‘Blackladder II’ released in 1986, where he played his original character.  and the same pattern was repeated in two more sequels ‘Blackladder the Third’ in 1987 and ‘Blackladder Goes Forth’ in 1989.

He created ‘Mr. Bean’ which first aired on New Year’s Day in 1990 in a half-hour special for Thames Television. He said that his main source of inspiration was Jacques Tati for that character.

He played in several series like ‘Barclaycard’, The Curse of Fatal Death’, etc. He appeared at the 2012 Summer Olympics opening ceremony in London as Mr. Bean in a comedy sketch where he performed ‘Chariots of Fire’. He was also starred as Jules Maigret in ‘Maigret’, a series of television films from ITV.

Rowan Atkinson: Net Worth and Salary

Rowan has an estimated net worth of $132 million as of 2018 including 4.65 million pound value of residence located in North London and it is indicated that his yearly income is near to $16 million. He has earned from his acting and from comedy roles.

There was a rumor that Mr. Bean has died in 2018, which was posted by FOX News. The post on social media claiming him to be dead is high overhead. However, it was not the first time the news came as a rumor.

Death Hoax Of Mr Bean For The Multiple Times!! Is Rowan Atkinson Dead? Killed By The Internet One More Time, News Is Going Viral Through Internet