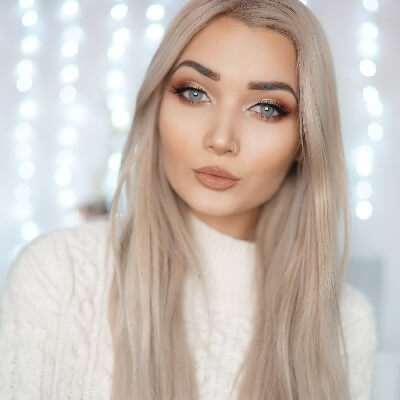 All this morning I’ve been seeing so many posts about people receiving lovely gifts, roses etc from their partners and I can’t help but think that seeing those posts could get you down if you haven’t found the right person for you yet! I wanted to be that little less “perfect” and realistic post amongst them all to remind you that it’s okay to be alone, you don’t need another person to fulfil you, you got this!

Roxxsaurus is in a relationship. She is currently having an affair with Matt Gibbs. Matt is a Filmmaker, Co Vlogger. The couple started dating from 26th July 2014.

They have decided to get married in 2021 and the destination wedding location is in the exotic Bali.

Roxxsaurus is a Polish-English YouTuber who has gained enormous fame for uploading DIYs, makeup, and fashion related videos on her channel which has gained over 4.28 million subscribers. Moreover, she is also famous on Tumblr where she shares her works as an artist/illustrator.

Roxxsaurus was born as Roksana Janiszewska on March 14, 1996, in Poland. As of 2020, her age is 24. She moved to Rugby, England when she was eight years old. She has not revealed much about her early life and family background. There is no information about her parents. Similarly, she has not revealed anything about her siblings.

She spent her childhood days in Poland and Rugby, England. Her ethnicity is Poland.

Roksana is a well-educated woman. She went to university and studied visual communication but has not revealed which university she attended.

Roksana created her YouTube channel, ‘Roxxsaurus’ on December 26, 2012. She posted videos on random topics ranging from DIYS, simple life hacks, and craft ideas to makeup tutorials, back-to-school videos, hair tutorials, and tricks and pranks. Her most popular video is titled ‘15 Braided Back to School HEATLESS Tutorials’ which has over 14 million views. Some of her other popular videos include ‘20 Beauty Hacks Everyone Should Know’, ‘20 Halloween Costume Ideas’, ‘4 Cute Braid Back to School Hairstyles’, etc.

As of July 2020, her main Youtube channel has over 4.28 million subscribers and her videos have reached over 408 million views.

Janiszewska started her second YouTube channel, ‘RoxxsaurusVlogs’, on March 28, 2016. However, she has since changed the name of the channel to ‘Roxi and Matt’ where she uploads vlogs with her boyfriend, Matt Gibbs. As of July 2020, the channel has over 425k subscribers and her videos have gained over 20 million views.

Roxxsaurus is also a makeup artist and has done collaborations with popular brands such as Maybelline numerous times. Also, her video on Maybelline’s Loaded Bolds lipstick collection became viral. Moreover, she was also hired by the London Dungeon to create looks inspired by its show, ‘Dare You Face Jekyll and Hyde.’

Furthermore, she has also launched her own merchandise like fitted tops, unisex t-shirts,  and tote bags, made from 100 percent organic cotton, and manufactured in a wind-powered factory.

Roxx stands at a height of 5 feet 4 inches and weighs around 50 kg. She has brown hair and similarly, a pair of brown eyes.

The Youtuber has not been involved in any controversies. She has been able to keep herself away from any type of controversy and scandal. So far, she has not done anything controversial in her career. She has kept her profile clean and has simply focused on her career and personal life.

You may also like to read more about the Bio, Career, Relationships, Social Media, and more about Desmond English, Amie Johnson, Ellie Louise, and more.