Roy Moore is married to political activist Kayla Kisor since December 14, 1985. They together have four children.

Kayla was previously married and divorced her ex-husband on April 19, 1985. 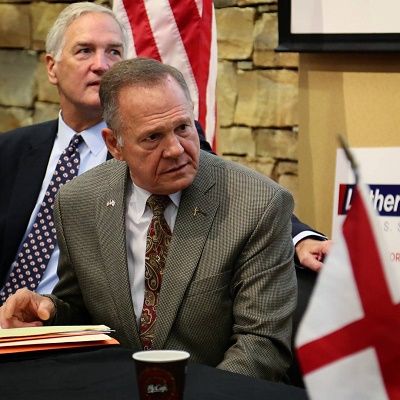 I pledged to support not only the U.S. Constitution, but the Alabama Constitution as well, which provided in its preamble that the state 'established justice' by 'invoking the favor and guidance of Almighty God.' The connection between God and our law could not be more clear.

Who is Roy Moore?

Roy Moore is an American politician. He used to be chief justice of the Supreme Court of Alabama.

Roy was the Republican nominee in the United States Senate special election in Alabama in 2017.

This politician was born on February 11, 1947, in Alabama, the US with the birth name Roy Stewart Moore. His father Roy Baxter Moore was a construction worker and his mother’s name is Evelyn Stewart. They both served in World War II.

Moore has two brothers and two sisters. Roy’s father worked for the Tennessee Valley Authority. He is of English-Scottish ethnicity.

He admitted the first year of high school at Gallant and then transferred to the Etowah Country High School and graduated in 1965.

Later, he joined the United States Military Academy on the recommendation of Albert Rains. In 1969, Roy graduated with a Bachelor of Science.

After graduation, Roy Moore served as an assistant district attorney at the Etowah country district attorney office. He served as a company commander at the Military police Corps during the Vietnam War. Roy was appointed as a circuit judge by Governor Guy Hunt and was elected to the position at the next term.

He also served as the commander of 188th Military Police Company of the 504th Military Police Battalion and insisted his troops salute him on the battlefield, despite official training. He was given the nickname ‘Captain America‘, due to his attitude toward discipline.

In 1974, Roy was discharged as captain from the United States Army. The same year he was admitted to the University of Alabama School of Law. He was the first full-time prosecutor in the Etowah County district attorney’s office.

Later, Moore leaves Gadsden and lived in Australia for some years where he worked at the Telemon ranch near Springsure. Moore was the first county-wide Republican to win Reconstruction in the 1994 Etowah County election.

In 2001, Roy was sworn in as chief justice defeating Democratic contender Sharon Yates in November’s general election with over 60% of the vote. He won the Republican nomination,  in the March 2012 Republican primary for chief justice of Alabama. From 2006-2009, this politician wrote weekly columns for the website ‘WorldNetDaily’.

In 2002, he also founded a non-profit organization Foundation for Moral Law.

Roy received the annual pension as a former judge of $136,000. He also worked in different NGOs and was a highly paid, judge. Roy’s average earning per year is estimated to be $300,000.

Meanwhile, according to some sources, his estimated net worth is $4 million as of 2022.

This politician came in a headline with the rumor when Delores Abney and her husband told that Roy is always interested in teenagers and he was always talking about younger women.

There were multiple allegations about sexual misconduct against him. He was rumored to be banned from local malls for trying to pick up teenagers.

Alabama resident Leigh Corfman says that Moore initiated the sexual counter with her in early 1979 when she was 14 years old. He was suspended from the chief justice position two days after the deadline for the Ten Commandments monument’s removal had passed.

According to CNN, this judge is anti-gay, abortion, Islam, and anti-homosexuality. He argued that the United States is an Evil Empire comparable to the Soviet Union, saying that America is the focus of evil in the modern world exporting acceptance of homosexuality in the world.

His speech received criticism because it appeared to suggest that non-Christians did not enjoy religious protections. He also rejects the theory of evolution.

Roy Moore is 5 feet 9 inches tall with an average weight of 65 kg. Likely, he has light brown hair and dark brown eyes.