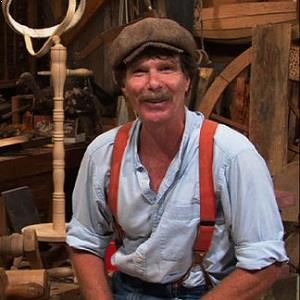 We are creators and teachers. The confidence of humankind is based not on superior strength or speed but on our abilities to shape the materials of our environment and to communicate our experiences. With each swing of the axe, each joining of the wood, you build and preserve within you the living memory of this timeless trade. The satisfaction you gain is well deserved.

Roy Underhill is a married man. He has kept most of his personal information to himself. There is no information regarding his marriage date and the location of the wedding ceremony. He has two daughters from the marriage, Rachel Underhill, and Eleanor Underhill.

Who is Roy Underhill?

Roy Underhill is an American television celebrity personality and host. People widely recognize him from his PBS series ‘The Woodwright’s Shop’.

Roy was born in Washington, D.C on December 22, 1950. Most of the information relating to his early life and childhood years are not available at present. He has a brother named Thomas Underhill and he also has a sister. He is of American nationality. Currently, there is no information regarding his ethnic background.

Talking about his education, Roy attended the University of North Carolina located at Chapel Hill. He graduated from there with a degree in Theater. Later, he attended Duke University and joined engineering, forestry, and history. Additionally, he earned a Master of Forestry in 1977.

Roy set out to have a career in acting. This did not turn out as planned and hence he moved to the remote areas of Mexico. Later, he approached the UNC Center for Public Television for a woodworking show after his graduation.

Roy was the first master housewright at the Colonial Williamsburg reconstruction. He currently serves as the host of the PBS series ‘The Woodwright’s Shop’.In addition, he also works as a  communications consultant at present. Apart from his work on television, he is also the author of several books including The Woodwright’s Eclectic Workshop and Woodwright’s Shop: A Practical Guide to Traditional Woodcraft.

Although quite a famous personality, Roy has not revealed much information about his current salary. He has an estimated net worth of around $250,000.

Although Roy’s sudden change in passion has raised some eyebrows over the years, he has not been part of any notable controversies throughout his career. Currently, there are no rumors concerning Roy and his career.

His hair color and eye color is brown.