Updated On November 8, 2022 | Published By: Isha Shayak | In Child , Lifestyle , Married
Share this 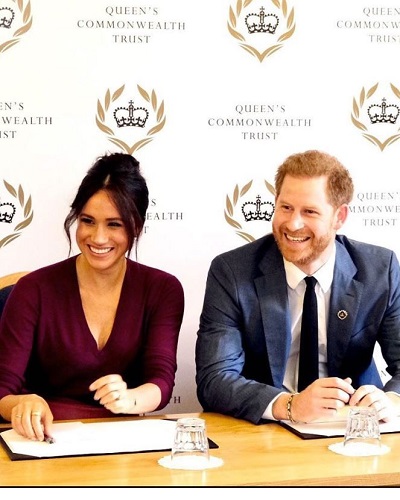 Royal watchers are paying attention to every small detail of Prince Harry and Markle. Their royal tour of Africa seems to be one clue. Meghan was spotted recycling a number of her outfits.

First of all, fans noticed Meghan was wearing the same blue dress. She wore it when she was pregnant during her royal tour in Australia last year.

On other dresses like a black-and-white print maxi wrap dress and the olive and brown striped dress also fans were wondering if she was sporting a baby bump.

The Duke and Duchess of Sussex joined hundreds of veterans and their families at the 91st Field of Remembrance at Westminster Abbey, to honour and remember those who lost their lives in service of their country. Their Royal Highnesses each planted a Cross of Remembrance, paying respect to those who have served in our Armed Forces. They were then honoured to spend time meeting with veterans and family members from all areas of the Armed forces – from those who have served in past campaigns to more recent conflicts. This is the seventh time The Duke has attended the Field of Remembrance – having previously accompanied The Duke of Edinburgh for several years. The Duchess of Sussex was grateful to be able to join her husband on this important day and to personally recognise those who have served. #remembrance #lestweforget

Secondly, Meghan’s choice of wearing more loose-fitting clothes led royal watchers more suspicious. While rumors are not yet answered, however, fans are just going crazy about it. They are keeping an eye on every small detail which could help them find the truth.

“Meghan’s touch and affection rituals with Harry seem to have increased rather than diminished now they are technically out of the honeymoon phase, while he appears even more openly besotted.”

Pointing out some of the body language she instead of Markle being a mom. She added:

“Her glances at her husband suggest approval and open admiration for the man he appears to have become. The couple ‘stroke’ one another verbally as well as non-verbally in public too, with each pouring praise on the other’s parenting skills.”

[Sound On ?] Today is International #DayoftheGirl, a day observed globally and created by the United Nations to acknowledge the gender inequality that exists worldwide. Be it lack of access to education, stigma surrounding MHM, forced child marriage, legal or medical inequality, or gender-based violence, there is a pressing need to support young women in their path to excellence. It is also a day to celebrate and encourage girls to know their value and to support them in taking action to grow into the women they wish to be. The Duchess of Sussex has been a long time advocate for women’s and girls rights and at the age of eleven campaigned against a sexist advertisement, which was then changed. No matter what age, or what background you have the power to make an impact. HRH recently shared a quote during a speech in Cape Town: “Visualize your highest self, and show up as her.” • To all of the young girls reading this today on International Day of the Girl, that quote is for you. Video©️SussexRoyal (Images used are from accounts we have followed and PA images)

Other gestures could easily prompt rumors of baby number two.

Moreover, Harry and Meghan were also found playing with the children and were offered cupcakes and refreshments.

“there are also some rituals and gestures that could easily prompt rumors that baby number two is on the way, especially as Meghan’s first pregnancy was announced on their last tour. It would be easy to imagine that the couple would be keen to have their second baby quite quickly, thanks to Meghan’s age and the fact that both she and Harry appear almost champing at the bit to get on with their global campaigns as an A-list power couple.”

Prince Henry of Wales, familiarly known as Prince Harry, is the younger son of Charles, and Diana. At the time of his birth, he was third in the line of succession to succeed his grandmother, Queen Elizabeth II, but is currently fifth in line after his father, his elder brother Prince William, and William’s children, George and Charlotte. more bio…

Meghan Markle is an actress and humanitarian who hails from America. She gained a lot of popularity and fame for playing the role of Rachel Zane in the popular legal drama series called Suits. Also, she earned a special mention for appearing as Amy Jessup in the sci-fi thriller movie named Fringe. more bio…