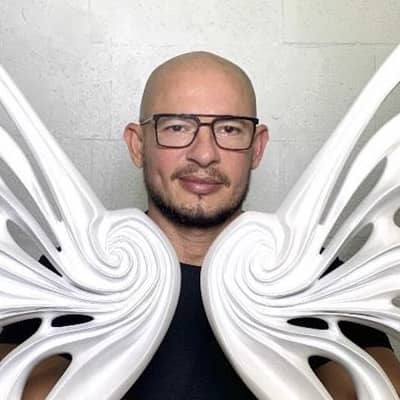 Rubem Robierb is currently openly gay and is in a marital relationship. He is married to a popular anchor, Sam Champion. They first met each other in 2005 and started to date each other.

Then after seven years of affair, they engaged in Oct 2012 and exchanged vows on 21 Dec 2012. Their wedding took place in New York and was attended by their family and friends.

Rubem and his husband often share their pictures on social sites.

Rubem Robierb is a Brazilian visual artist. He is popular for his unique 2D Pop-Art style.

He is also the life partner of anchor Sam Champion.

He was born on 01 Dec 1976 in Bacabal, State of Maranhão, Brazil. The details are not shared about his father, mother, and sibling’s details.

He belongs to an unknown descent and his academics are behind the curtains.

Rubem Robierb from his childhood has an interest in photography and poetry. He then in 2005 showed his photography exhibition in France known as Brezil Autrement.  Then his art was showcased in cities like São Paulo, Zurich, Monaco, Paris, and Milan.

In Sep 2019, he made an amazing sculpture and named Dandara after a transgender woman. It was showed in Tribeca Park, New York City. Now seven countries appreciate plus feature his artwork.

At present, this artist is busy on two sculptures dedicated to health care workers.

Regarding Rubem Robierb’s body features, his height and his body weight are of average size.

Looking at his pictures, the color of his eyes is dark brown color and his hair is black.

Rubem is available on social sites. He is on Instagram which has over 20.4k followers. His post of 18 Nov 2020 is loved and appreciated by his fans.

Moreover, his Twitter has around 3k followers and his Facebook page Rubem Robierb Studio has more than 1.5k followers.

You may also read the bios of Lindsay Capuano, Alejandro Rosario, and Alec Steele.