Rubi Rose is an American rapper, artist. Currently, Rubi is not dating anyone and low key about her affair. 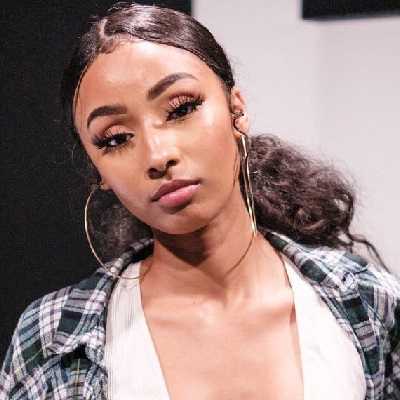 Previously, she was in a relationship with the Playboi Carti in 2018. However, they broke up with each other.

She also had an affair with high profile rappers including 21 Savage and Travis Scott.

After having bitter experience dating rappers, she said in an interview that she is done with dating rappers. Despite having relationship with the high profile rappers, it did not benefit her career and personally as well.

In her interview with No Jumper, she confirmed that she is focusing on her music career for now.

Who is Rubi Rose?

American Rubi Rose is a rapper, model, and video vixen. Rose is renowned for making her appearance in Migos’ music video, Bad & Boujee.

Rubi Rose was born on 2nd October 1997 in Lexington, Kentucky. She is of Mixed (British, German, French, and Scottish) ethnicity with Eritrean and Japanese ancestry.

Her mother is of Eritrean roots. She is multilingual and can speak eight languages. She has shared some of the amazing moments of her life with her mom via Instagram on the occasion of her mother’s birthday.

Her father is portraiture. He is active on Instagram with the handle, pavosage. Also, she mentioned that her father has a great influence on her life.

Moving to her academics, she graduated from High School in 2015. Currently, she is attending Georgia State University.

She started her professional journey with Instagram. Accumulating fans on Instagram, she started modeling in 2014. The year, she made her appearance in the video for the recording label, LVRN.

The following year, she featured in the music video of the song, Cigarette Song the singer and songwriter, Raury. The video became one of the initial milestones of her career as a video vixen.

Last, in 2019, she made her SXSW debut performing with Buffalo Billboard. The year, she released her debut solo song, Trickin. Also, she has worked with the Cuban Doll and Renni Rucci for the single, A.G.F. In April 2020, she dropped her latest single, Pretty MF.

When she was in a relationship with the rapper, Playboi Carti, she became a victim of domestic violence. As per TMZ, she told cops their argument started when they had a dispute on a small matter that the rapper wanted her to call her mother. Whereas she didn’t want to call.

Soon, the dispute became violent as they started pushing and grabbing each other. Later, the rapper was arrested on the charge of domestic battery.

You may also read the bio, age, family, career, net worth, salary, and social media of Flo Milli, Tahiry Jose, and Unghetto Mathieu.

Who is Sasha Cobra from Netflix show [Un]well? Know about her present day, social media and more