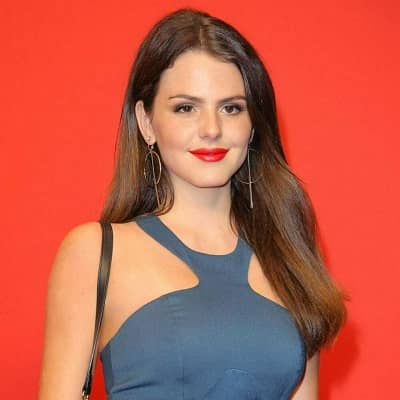 Ruby O. Fee is not single, the 25-year-old actress is dating a 40-year-old German actor and producer, Matthias Schweighöfer.

For those who don’t recognize him, the actor and director will be starring alongside her in the Netflix movie Army of Thieves.

They have been together for more than 2 years and are spending joyful moments together.

Ruby O. Fee is a Casto Rican-German actress, model, and producer and is best known for her portrayal as Korina Dominguez in the film ‘Army of Theives‘.

Ruby O. Fee was born and raised in San José, Costa Rica on 7 February 1996. Her birth name is Ruby Moonstone Camilla Willow Fee. As of 2021, she celebrated her 25th birthday.

Likewise, her biological father left shortly after her birth. She was raised by her German mother and her French stepfather in Brazil. Therefore, she spent most of her childhood in brazil.

There is no information about her siblings if any. In the year 2008, she moved to Berlin, Germany along with her stepfather and mother.

Similarly, she has a birth sign of Aquarius and has dual nationality in Costa Rica and Germany. Talking about her education, she was educated at Béla Bartók Music School after moving to Berlin at the age of 12.

Ruby O.Fee has shown her talent from acting to modeling. Ruby got her TV film breakthrough from the film ‘Womb’ in 2010. At the time, she was just 14 years old. In the same year 2010, she had her first big appearance as Sophie Kellermann in the tv series”13 Hours: Race Against Time’.

From 2010 to 2014, she became popular among the kids as she acted on the films Dead, Lotta, Letzte Spur Berlin, Die schwarzen Brüde, Bibi & Tina, and Kein Entkommen. Furthermore, she has marked her presence from various films such as, ‘Das Geheimnis der Hebamme’, ‘Shakespeares letzte Runde’, ‘Zazy’, ‘Prinz Himmelblau und Fee Lupine’, ‘Die Ketzerbraut’, ‘Shades of Guilt’, ‘Tatort’, ‘The Old Fox’, ‘Rosamunde Pilcher’, ‘Polar’, ‘Morden im Norden’ ‘Leipzig Homicide’, and ‘Army of Theives’ among the others.

Apart from acting, she is also a model which is managed by a talent agency named fixselect. She also has various brand endorsements and also has graced the covers of various magazines.

Ruby has been earning a hefty amount and has an estimated net worth of $500K.

Ruby O.Fee stands 5 feet and 7 inches tall and weighs around 55 kg. She has attractive hazel brown eyes and dark brown color hair. Furthermore, she has 35-27-36 inches of body measurements. She is a fitness freak and prefers a fit and active body.