Rudy Giuliani is an American attorney, cybersecurity advisor, and politician. He served as the 107th Mayor of New York City from 1994 to 2001.

Rudy Giuliani has married three times. He wed his second cousin, Regina Peruggi, in 1968, but they received an annulment in 1982.

In the same year, Rudy married the T.V. personality, Donna Hanover and he had two children with her, son Andrew and daughter Caroline.

Their relationship became sour while he was working in the Mayor’s Office. He left the mansion and started living in an apartment with his friends. Hanover discovered that her husband is gonna leave her in a T.V.interview.

Guiliani had a relationship with Judith Nathan while still married to Hanover. After their official divorce in 2002, Guiliani exchanged vows with Judith in 2003. They have a daughter named Whitney. However, after 15 years of marriage, they divorced on April 4, 2018.

He is currently dating Maria Ryan. His girlfriend is a doctor. He was also linked with Jennifer LeBlanc. 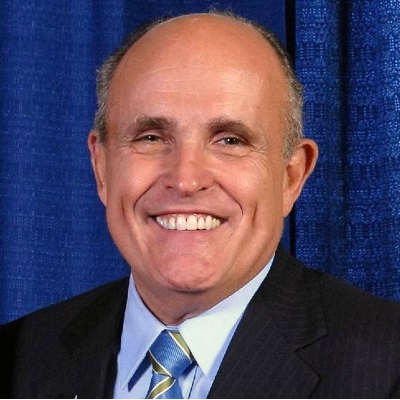 Change is not a destination, just as hope is not a strategy

Leaders need to be optimists. Their vision is beyond the present

Now we understand much more clearly. why people from all over the world want to come to New York and to America. It's called freedom

Who is Rudy Giuliani?

Rudolph William Louis Giuliani or Rudy Giuliani is the 107th Mayor of New York City from 1994 to 2001.

Rudy Giuliani is an important American politician, attorney, public speaker, and businessman. Currently, he is an attorney to President Donald Trump.

He became the U.S. Attorney for the Southern District of New York, a position he held until 1989.

They were a middle-class family and Rudy was their only child. He has no siblings. His ethnicity is Roman-Catholic and his nationality is American.

Rudy Giuliani attended Bishop Loughlin Memorial High School in Brooklyn, New York from where he graduated in 1961. After that, he attended Manhattan College in Riverdale where he majored in political science.

After graduating from there in 1965, he decided to attend the New York University School of Law in Manhattan. From there, he graduated with a Juris Doctor degree in 1968.

In 1977, he left the Attorney’s Office and spent four years practicing with the firm Belknap, Patterson, Webb, and Tyler in New York. After that, in 1981, he returned to Washington and served as the associate attorney general to President Ronald Reagan.

Two years later, he was appointed as U.S. attorney for the Southern District of New York and began his fight against drugs, violence, and organized crime in New York.

His six years as the attorney was significant for the whole of New York City. He worked tirelessly to imprison drug dealers, white-collar criminals, government corruption, and organized crime.

During that time, he convicted 4,152 criminals which makes him one of the most effective U.S. Attorneys in American History.

After losing with a thin margin in the mayoral votings in 1989, he again challenged Dinkins in 1993. This time, Guliani emerged victoriously.

On January 1, 1994, he took the office of the mayor and became the 107th mayor of New York City. His time as mayor improved the condition of the city significantly. Crime-rate decreased, police shootings fell, violence in city jails, etc all decreased massively.

In September 2011, al-Qaeda terrorists hijacked two commercial passenger planes and crashed them in the twin towers in Manhattan.

During this massive terrorist attack that shocked the world, Guiliani came into the international spotlight. Guiliani’s leadership during this time of crisis inspired many people.

He arrived on the scene within minutes of the attack and coordinated the rescue operations. This helped to save 20,000 lives.

He emerged as the voice of consolation for the whole nation. On December 31, 2001, he left the office of the Mayor. Even after leaving as the Mayor, Giuliani has been in the public eye. He started his business firm in 2002 which grew into a multi-million affair.

Rudy Giuliani has won many awards in his career. In 1998, he received the Hundred Year Association of New York’s Gold Medal Award for his outstanding contributions to New York City. He received Knight Grand Cross for his leadership in the 9/11 attacks.

Also, the same year he was named the Time’s Person of the Year. Furthermore, in the same year, Former First Lady Nancy Reagan awarded him the Ronald Reagan Freedom Award. similarly, he received the Academy of Achievement Golden Plate Award in 2003.

The accolades kept coming to Giuliani in the following years. He received honorary degrees from Loyola College and Middlebury College in 2005.

Also, in 2007, he received an honorary doctorate in Public Administration from The Citadel. Furthermore, he received the NIAF Special Achievement Award for Public Service in 2007.

Moreover, the Atlantic Bridge awarded him the Medal of Freedom in 2007. In 2009 he received an honorary degree from Drexel University.

Rudy Giuliani is one of the richest politicians in the world. Currently, his net worth is a massive $50 million as of 2022.  The assets of him and his wife together are worth around $60,000,000 according to reports.

He represents the President for free. But, he has other sources of income. His business firm ‘Giuliani Partners’ is his main source of income.

Several thousands of recovery workers have faced long-term health issues. It was related to the clean-up of the 9/11 attacks.

More than 10,000 workers of that time sued the city and it resulted in a massive group settlement that cost more than $600 million.

Rudy Giuliani is approximately 5 feet 9 inches tall. Similarly, he weighs about 74 kg. He has salt and pepper hair and light brown eyes.