Rudy Mancuso’s girlfriend’s name is Maia Mitchell. She is from Lismore, Australia, and was born in 1993, on August 18. Maia is famous for being a TV actress.

Since 2015 they have been dating each other. 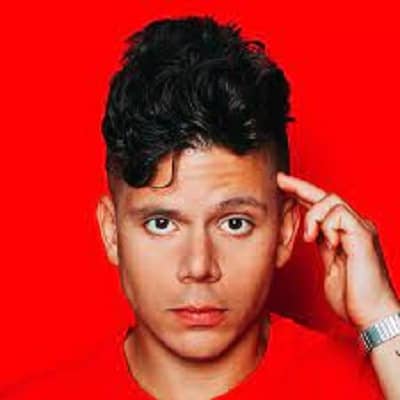 Who is Rudy Mancuso?

Rudy Mancuso is an American actor who has several personalities. Further, he is a musician, comedian, and internet personality.

In addition, he received an award at the 2018 ALMAs, which was presented by fellow Shots Studios star Alesso in the year 2018.

He was born on the year of 1992, February 28 in New Jersey, United States. He is American by nationality and was raised in Glen Ridge, New Jersey.

The 29 years old Ruddy was born to an Italian-American father and Brazilian mother. Therefore, he belongs to a mixed ethnical background.

Talking about her siblings, he has one sister named Marianna. He hasn’t revealed any further information related to his parents.

At an early age, he was fascinated with music so that he started to learn piano as a child. Then, he acquired his attraction for music into other branches of entertainment, including comedy and acting.

He switched on to Vine by a friend and started to broadcast his comedy sketches in early 2013. His interest drove him to discovered Vine more and more. Fortunately, he became a Vine star which began with the help of a music video of the Wimboweh song. Meanwhile, he brings out the video on the platform, he became an eminent star.

With the aim of taking wider advantage of his fame and talent, he shifted towards YouTube permanently in 2016. After that, he became active on YouTube, and he accompanied Shot Studios to produce videos. Rudy flows with great success and be able to get 5.7 million subscribers and has over 800 million views.

He has appeared on entertainment companies including HBO’s Outpost and Comedy Central’s Drunk History. He launched his channel and has become one of the top YouTube names for musical comedy. Further, he and his partnering studio company, Shots Studios, also owned a channel called Awkward Puppets, a puppet series that is hosted by him.

Besides the fact that he has been able to perform in various venues across the world alongside music stars like Justin Bieber. Brazil’s biggest music festival, Villa Mix was performed by Mancuso. His other pursuit includes directing videos and cinematography.

Rudy Mancuso is one of the most famous Internet personalities. This actor is best known for his comedic videos on YouTube. However, he was once involved in rumors and plagiarism controversy.

He was officially dating Maia Mitchell since 2015 and they have supported one another respectively. Additionally, they have published several musical and comedic videos together for YouTube and Instagram.

Besides being that, they have recorded songs together, including “Sirens” and “Magic”. Sad to say that, the former exposed to end Mancusco’s music career. As soon as they released “Sirens”, Billboard referred to its chorus as “an interpolation of Eisely’s Ambulance” in the year of 2015, December. An interpolation means the use of a melody from an earlier recorded song but, instead of sampling or re-recording it.

They were accused of plagiarism. Nonetheless, Mancuso later added a disclaimer on the video giving the Texan rock band his credit.

In spite of all, one of the members of the group named Sherri DuPree said that Mancuso and Mitchell were authorized to use their song, but the damage was already done.

At that time, people believed that it could worsen their careers. In contrast with that, they are still active in the entertainment industry.

The rumors were created by fans that the couples had split up in 2016 because Mitchell has deleted all photos showing them together, but neither of them confirmed such a claim. They are considered the most beloved couples on social media.

This actor has an estimated net worth of more than $4 million as of 2022. His source of income comes from being a successful actor and Comedian.

His eyes are dark brown in color. He has short brown hair.

He has huge fan followers on Instagram as of 9.7 m. Likewise, he is famous on Facebook too as he has 3.9M followers.