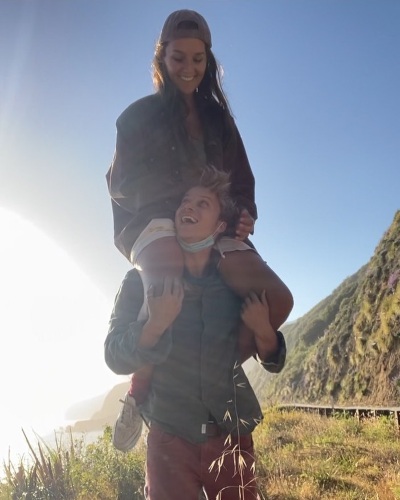 Rudy Pankow is a supportive boyfriend to Elaine Siemek. He is defending his girlfriend Siemek on Instagram after she received tons of negative comments online. Rudy shared a picture of the couple and wrote,

“I’m here to call out the disrespect and harassment someone who I love dearly is getting on a daily basis. It has gotten to the degree where lies are being spread and accusations are being said that go [sic] beyond the normal ‘hate,'”

“Not only is she not what she is being accused of being, she is the complete opposite and actively is so. Accusing someone you don’t know of being abusive and manipulative is not ok, especially when you don’t know the relationship personally,”

Pankow revealed that he may not post about his relationship regularly but he is very happy with Siemek. It is his personal decision to keep the happy moments private. Rudy asked people who are creating displeasure and opinions about her to stop.

He also addressed how necessary it is to spread positivity in this era of social engagement and enlightenment. He said that he would be grateful if people move forward in positivity and respect.

Also read Jenny Meinen is engaged to boyfriend Beau Mirchoff! Who is Jenny?

Relationship between Rudy and Elaine Siemek

Rudy Pankow and Elaine Siemek are quite private about their relationship. It is not known when the couple got together and started dating.

It is suspected that the couple met each other on the set. Rudy first mentioned her on his social media in November 2020 when he wished her her birthday.

She has been accused of being racist, abusing, and dating Rudy for fame. But their relationship has been going well. Rudy is madly in love with her and supports her.

Also read Is the relationship of Meghan Markle and father Thomas Markle getting better?

Rudy Pankow is an American actor. He is popular for his role as J.J. Maybank on the Netflix drama series Outer Banks. Within a short time, he has been successful in building his acting career. Read more bio…