Who is Rufus Hound dating after his divorce?

Rufus Hound is currently single and is not dating anyone after his divorce.

Rufus Hound was married to Beth Johnson in April 2007 at the Little White Wedding Chapel in Las Vegas, Nevada. He met her at the Reading Festival the year before.

Together they had two children, Hilda & Alby Hound. They have been separated since April 2020. 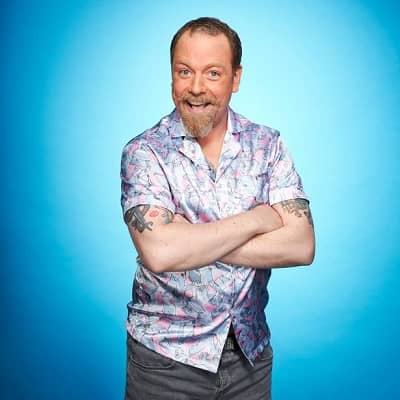 It was only once I'd read my first Who (Doctor Who (1963)) book that I began calling myself a true fan. My grand plan is to work in the theatre and do some TV and movies until I've built up enough of a reputation to be cast as the Doctor.

Who is Rufus Hound?

He has hosted Top of the Pops and the BRITs Awards and appeared on Strictly Come Dancing and The Apprentice. He released his first stand-up DVD, Being Rude.

Hound was enrolled in Willy Bridge School, After leaving school, he started working for a PR agency but started performing comedy in the evenings. He holds British nationality.

Rufus was elected as a Student representative and built the college radio station. Also, he began working for a PR agency but started performing in the evenings.

Later, he quit his job in 2000, as an account executive for Claire’s Accessories to begin working full time as a stand-up comedian.

He adopted the stage while working at the Edinburgh Festival name ‘Rufus Hound’ for the first time.

In 2005 and 2006, Rufus hosted Destination Three, the coverage of the Glastonbury Festival and Top of the Pops.

Also, he has appeared in many comedy shows and quizzes such as Street Cred Sudoku, Nevermind the Buzzcocks, and Celebrity Juice, where he was a regular panelist. In 2009, he narrated the series Rocket Science.

He has appeared on The Apprentice: You’re Fired, and Richard & Judy. Also, he presented Outtlake TV on BBC1, replacing Anne Robinson.

Similarly, he has presented a program on BBC Radio Four called My Teenage Diary in which celebrities talk about the diary that they kept in their teenage years since 2012.

He made his debut as a panelist on BBC Radio 4’s Just A Minute on 22 February 2016, alongside regular Paul Merton and semi-regulars Pam Ayres and Graham Norton.

In March 2015, Rufus contributed his vocals to the track “Tazer Beam” by The Skints from their album FM.

Rufus made his acting debut in the Direct-to-DVD film Big Fat Gypsy Gangster which was directed by Ricky Grover. In 2012, he starred in the film The Weeding Video.

He also played the lead role of Francis Henshall in the National Theatre’s second touring production of One Man, Two Gunvours from October 2012 through February 2013.

Hound played the lead role of Freddie in the West End production of Dirty Rotten Scoundrels after out-of-town tryouts in Manchester and Aylesbury.

He played Toad in the world premiere of the new musical, The Wind in the Willows in Plymouth, Salford, and Southampton.

He played Tom Good in the UK tour of The Good Life based on the BBC sitcom in 2021.

In the 2010 general election, Rufus campaigned for the Liberal Democrats, later he declared his support for the Labour Party.

Rufus earns a good income from his work as a comedian, actor, and presenter. However, his exact net worth and salary are not disclosed yet.

As per sources, he has an estimated net worth of around $1 million-$5 million.

Rufus wrote a series of tweets concerning the Manchester Arena bombing where he implied the attack was a false flag operation designed to help the Conservative Party in the upcoming general election, likening it to the German Reichstag fire of 1933.

The comments he made were highly criticized, he was compared to 9/11 truther conspiracy theorists and accused of insensitivity to the victims of the attack. Later, he wrote a comprehensive apology via social media.

Rufus stands tall at a height of 5 feet and 9 inches. However, his weight and other body measurements are unavailable to us.

He has short blonde hair color and beautiful blue eyes. Also, he has dyed his eyebrows and mustache to blonde color.

He is mostly active on Twitter with one million followers and has more than 20k followers on Instagram under the username @dogfacedboi.