RuPaul is an American drag queen who was Crowned The Queen Of Manhattan in 1989. He is currently the host of his own show, RuPaul: What’s The Tee? w/Michelle Visage. He was married to Georges LeBar.

The pair later decided to take the relationship a step forward and hence married in January 2017. 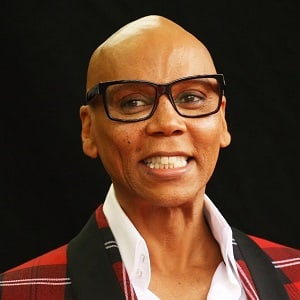 If you don't love yourself, how the hell you gonna love somebody else?

I do not impersonate females! How many women do you know who wear seven inch heels, four foot wigs, and skintight dresses?

Doing what I do for a living has never been easy. I've had to fight countless battles in this game that the public has no idea ever happened. But, I just pick myself up and carry on, I Carry On.

Remember, this country was founded by a bunch of men wearing wigs.

RuPaul is an American drag queen, actor, author, singer, model, and television personality. He has been the producer and host of the reality competition series ‘RuPaul’s Drag Race’ since 2009.

Additionally, he has appeared in several movies in his career including ‘Crooklyn’, ‘The Brady Bunch Movie’, and ‘But I’m a Cheerleader’ among others.

How old is RuPaul?

RuPaul is 60 years old. He was born in San Diego, California on November 17, 1960, as RuPaul Andre Charles, to parents Ernestine Charles and Irving Charles.

After his parents’ divorce in 1967, he and his three sisters lived with their mother.

He became interested in the world of glamor and show business in his childhood years and singing was his hobby as a child.

He is of American nationality. Furthermore, he belongs to a mixed ethnic background of African-American, African, French, and Swiss-German.

Talking about his education, Charles attended the North Atlanta School of Performing Arts.

Later, RuPaul began performing in drag primarily in the East Village area. Eventually, he was given the title of Queen of New York. In addition, he released his debut album, ‘Supermodel of the World’.

Since then, he has released 10 other studio albums including ‘Foxy Lady’, ‘American’, ‘Butch Queen’, ‘Slay Belles’, ‘Realness’, and ‘Born Naked’ among others.

Apart from his career in music, Charles has also appeared in several movies and television series.

Some of them are ‘Show Dogs’, ‘Broad City’, ‘Last Week Tonight with John Oliver’, ‘Girlboss’, ‘2 Broke Girls’, ‘Hurricane Bianca’, ‘Harvey Beaks’, ‘The Comeback’, ‘Happy Endings’, ‘Ugly Betty’, and ‘Another Gay Sequel: Gays Gone Wild!’ among others. Furthermore, Charles is the most commercially successful drag queen in the United States.

He also has credits as a producer and writer.

He has won two Primetime Emmy Awards. Additionally, he has also won the Critics’ Choice Award, Vito Russo Award, and Gold Derby TV Award. All in all, he has 7 wins and 10 nominations to his name to date.

As of 2022, he has an estimated net worth of around $65 million. He is apparently the most commercially successful drag queen in the US.

RuPaul has signed modeling with MAC Cosmetics. He also does a podcast with his co-host Michelle Visage.

Further, he partnered with Colorevolution, makeup and beauty products brand.

He owns a mansion in Beverley Hills which is worth $13.8 million. Also, he has an apartment in New York and a condo in West Hollywood, California.

He became part of a controversy in 2014 after people criticized him for allowing the use of discriminatory language directed towards trans women in his show.

Additionally, his comments on transgender drag have also been termed controversial over the years. At present, there are no rumors concerning Charles and his career.

Talking about his body measurement, RuPaul has a height of 6 feet 4 inches (1.93 m). Additionally, he weighs around 78 kg. Furthermore, he is bald and his eye color is light brown.

RuPaul is active over social media.