Rush Limbaugh was married to his fourth wife before taking last breath. He doesn’t have any children from his four weddings.

He exchanged vows with a wedding planner Kathryn Rogers on 05 June 2010. They started to date each other in 2007 ad finally tied the knot after three years.

Rush first wedded Roxy Maxine McNeely who was a sales secretary on 24 Sep 1977. Their wedding took place at the Centenary United Methodist Church.

But this couple filed for divorce after three years in March 1980 and it was finalized in July of the same year.

Other Spouses and Affair

He then walked the aisle with Michelle Sixta in 1983. They divorced in 1990 and then Rush wedded his third wife named Marta Fitzgerald in May 1994.

She is an aerobics instructor and they perform the ceremony at the house of U.S. Supreme Court Justice Clarence Thomas. He also officiated the wedding.

But this conjugal relationship also crumbled and they officially divorced in Dec 2004. After Marta, he began an affair with anchor Daryn Kagan from Sep 2004 till Feb 2006. 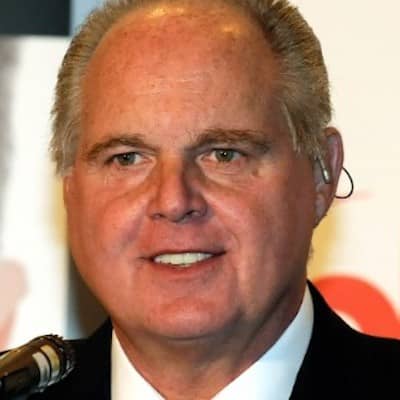 Poverty is not the root cause of crime

If you commit a crime, you're guilty.

Who was Rush Limbaugh?

Rush Limbaugh was an American radio personality plus political commentator. He was also an author and television show host.

He hosted a radio show named The Rush Limbaugh Show. This shoe was titled the most-listened-to radio show in the US in Dec 2019.

The news of him having lung cancer was came in Jan 2020. This became the reason for his demise. On 17 Feb 2021, at the age of 49, Rush kicked the bucket at his Palm Beach house.

In 2000, he was diagnosed with autoimmune inner ear disease and was almost deaf. But due to the cochlear implant, he regained his hearing.

His birthdate was 12 Jan 1951 and he was born in Cape Girardeau, Missouri, US as Rush Hudson Limbaugh III.

The name of his mother was Mildred Carolyn and his father’s name was Rush Hudson Limbaugh II.

Rush’s ancestry was German and had a younger brother, David.

As per his academics, he passed out from Cape Girardeau Central High School. He also enrolled at Southeast Missouri State University but left after a year.

Rush Limbaugh was mainly known for hosting a radio show named The Rush Limbaugh Show. It was a weekday shoe and used to be 3 hours long.

As an author, he wrote two books The Way Things Ought to Be and See, I Told You So in 1992 and 1993 respectively. His third publication came out in 2013 titled Rush Revere and the Brave Pilgrims.

He was a charitable person and supported Marine Corps-Law Enforcement Foundation and Tunnel to Towers Foundation. Rush used to organize a telethon every year for Leukemia and Lymphoma Society.

For his amazing work, he won the Marconi Award not once but five times. He also received the National Radio Hall of Fame (1993), NAB Broadcasting Hall of Fame (1998), and Presidential Medal of Freedom (2020).

He owned a house in West Palm Beach that has 7 bedrooms, 12 bathrooms, and an elevator.

This radio star on his show said at the starting of the COVID-19 pandemic that it is just common cold. In 2006, he was held by the Customs officials after they found Viagra from his bag.

But he was released as his name was not on the prescription. Rush used to be a heavy smoker and he himself admitted that he was addicted to oxycodone and hydrocodone drugs.

Rush Limbaugh’s height was 5 ft 11 inches and his body weight was 95 kg. Similarly, his eyes were light brown and his hair color was also light brown.