Comedy actor Russell Brand is married and a father of one.

On talking about his relationship, Russell Brand had an affair with singer Katy Perry whom he met in mid-2009 while she filmed a cameo for his film Get Him to the Greek. The couple dating after meeting again at the 2009 MTV Video Music Awards in September.

The couple then got engaged on New Year’s Eve 2009 during a holiday in India and married on 23 October 2010 in a Hindu ceremony, near the Ranthambhore tiger sanctuary in Rajasthan.

However, Brand filed for divorce, citing irreconcilable differences on 30 December 2011, which was finalized in July 2012.

Then, Brand had a relationship with Jemima Khan, an editor of the New Statesman, and a daughter of financier Sir James Goldsmith from 2013 to 2014. But their relationship could not last long and got separated in September 2014.

Another, Brand has been having an affair with Scottish lifestyle blogger Laura Gallacher since 2015. The couple has been blessed with a child named Mabel.

The couple then tied their knot on 26 August 2017 in Henley-on-Thames. 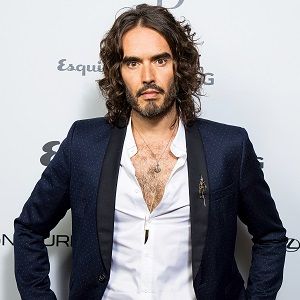 I've always had this impulse to be destructive. I have to say to myself, 'remember, you've got all these things to do - don't ruin it just for the moment.

It was nice of you to let him have a go, because, in England, he wouldn't be trusted with a pair of scissors. (On George W. Bush)

It's no wonder Bob Geldof knows so much about famine - he's been dining out on I Don't Like Mondays for 30 years.

When I'm improvising I say anything that comes to mind - a lot of it disgusting.

Don't be lost. You are found also. We only have the moment. All that is real is the moment. Everything else is an illusion, so there we are.

Who is Russell Brand?

He is recognized for a Big Brother spin-off and Big Brother’s Big Mouth.

An actor was born as Russell Edward Brand on 4th June 1975 in Grays, Essex, England to his parents Barbara Elizabeth (née Nichols) and Ronald Henry Brand.

His father was a photographer. His parents got separated while he was just six months old.

Thus his mother raised him.

His mother suffered from uterine cancer and then breast cancer a year later while he was 8 years old. Brand settled with relatives during his mother’s treatment. He suffered from bulimia nervosa at the age of just 14.

He left home cause of disagreements with his mother’s partner at the age of 16 years.

The brand then initiated using illegal drugs like amphetamines,  cannabis, LSD, and ecstasy.

Besides, he initiated his theatrical debut while he was just 15 years old.

On talking about his educational background, he joined Grays School Media Arts College.

He then attended the Italia Conti Academy in 1991.

But unfortunately, the college expelled him after the first year for poor attendance and using illegal drugs.

Firstly, Russell Brand made his stand-up appearance in 2000.

Also, he worked as a video journalist for MTV in the same year but was subsequently fired. He then debuted his one-man show Better Now, an account of his heroin addiction, at the Edinburgh Festival continuing to work both on TV and stand-up in 2004.

A comedian gained popularity by performing on Big Brother and hosting his own talk show and several other series as a British television star, and in 2008 shot to fame worldwide as the rocker Aldous Snow in the hit comedy Forgetting Sarah Marshall (2008).

Moreover, he reprised the character of Aldous in the comedy Get Him to the Greek (2010), opposite Jonah Hill after an appearance in the Adam Sandler comedy Bedtime Stories (2008).

Furthermore, Brand also appeared in the remake of Arthur (2011), opposite Helen Mirren. He then played in The Tempest (2010).

Another, he lent his voice to Dr. Nefario in the animated feature film Despicable Me (2010) and to the Easter Bunny in Hop (2011).

He also reprised the role in Despicable Me 2 (2013) and appeared in Lonny in the all-star cast of the big-screen adaptation of the Broadway musical Rock of Ages(2012).

Additionally, as an author, he published books as My Booky Wook: A Memoir of Sex, Drugs, and Stand-Up.

In talking about his lifetime achievements and awards, he might not get any awards yet or has disclosed it to the media.

He would be getting awards soon cause of his successful career.

In talking about his salary and the net worth, he has a decent amount of salary but is currently unavailable.

He has an estimated net worth of $18 million that he earns from his profession.

After he attacked a paparazzo, he was arrested on 16 September 2010.

Paparazzo had blocked him and then-fiancée Katy Perry’s way at Los Angeles International Airport to catch a flight.

Another, Cause of allegations that he threw a photographer’s mobile phone from a window, Brand was issued an arrest warrant in New Orleans, the U.S. on 15 March 2012.

Besides, After getting the “Oracle” award, Brand was ejected on 3 September 2013 from the GQ Awards show.

In talking about his body measurement, Russell Brand has an hourglass-shaped body with a measurement of 44-33-16 inches.

He is 6 feet and 1 inch tall with a body mass of 74Kg. He possesses brown eyes and a light brown hair color.

To know more about Dave Annable, Nick Zano, and Azura Skye, please click on the link.

These are some celebrities who have opened up about their Bipolar Disorder!