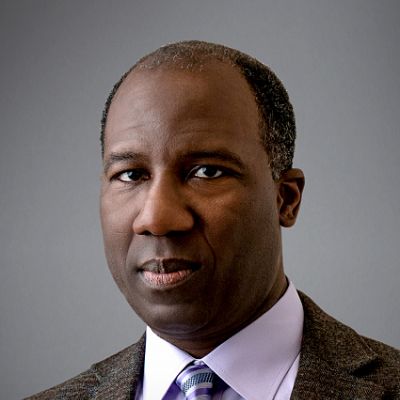 Russell G. Jones is a happily married man. He is married to Elz Cuya who is currently Deputy Director at North Star Fund. The couple together has a son whose identity is unknown at the moment.

Further, there is not much information available regarding his private life.

Who is Russell G. Jones?

Russell G. Jones is an American actor, theater artist, Researcher, and TV personality. He is the founder and Chief of Pedagogy at the Blind Spot Experience.

Jones is best known for playing the role of “Donn Cooper” in the CBS TV series, Tommy.

Russell was born and raised in Shaker Heights, Ohio. Currently, he resides in New York City. He hasn’t yet disclosed his birth date in the media.

The details regarding his early life, parents, and siblings are also under the curtains at the moment. Talking about his academics background, he went to Byron Middle School and Shaker High.

He then joined Boston University’s School for the Arts. Later on, he affiliation with Van Andel Research Institute.

Further, he holds an American national whereas his ethnicity is All-American.

Since 1995, Russell has been a member of the Labyrinth Theater Company. He has played in a total of 18 stage productions until now such as Saint Joan, In The Blood, King Liz, The Call, The Power of Duff, Ruined, Den of Thieves, and so on. Russell made his first television on NBC’s show Law & Order as Ray-Ray.

After then, he guest-starred in numerous series such as Elementary (as Attorney), Do Ni Harm ( as Lars), Louie (as Airport Security Officer), The Blacklist, The Knick, and more. In 2016, he got a supporting role as a detective in Steve Zallian’s crime drama, The Night Of aired on HBO. He was cast in the role of Norm in FX’s serial drama, The Americans alongside Chris Long, Matthew Rhys, and more.

Similarly, some of his notable films are Squeeze, Cement, Pinch, Mindsight, The Ticket, Detroit, Boy In The Bush, Queen of Glory, and more. As of now, he is starring in the role of Dr. Grover Stanely in Hulu’s Only Murders In The Building.

Russell has managed to maintain a clean profile to date. He usually stays a mile away from any sorts of rumors and controversy that create a huge buzz in the media.

Russell might have accumulated a decent amount of fortune throughout his acting profession. As of now, he hasn’t disclosed his exact net worth, salary, and other earnings in the media.

Talking about Russell’s physical appearance, he has a brown complexion. Likewise, he has a dark brown pair of eyes and a salt and pepper hair color.

These are some celebrities who have opened up about their Bipolar Disorder!