Russell Wilson is an NFL American football quarterback for Seattle Seahawks. He was honored with PFWA Good Guy Award. Russell is married to R&B singer Ciara since 2015 and they have a daughter. 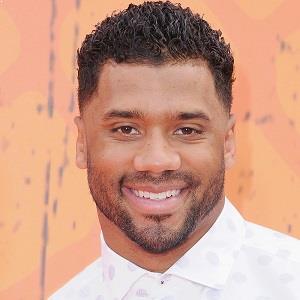 Russell Wilson is a married man. He began dating American R&B singer Ciara in early 2015 and announced their engagement on March 11, 2016. The pair married on July 6, 2016, at the Peckforton Castle in Cheshire, England.

Furthermore, their daughter, Sienna Princess Wilson, was born on April 28, 2017.

Previously, Wilson met his first wife, Ashton Meem, while they were both high school students. They married in January 2012 and divorced in April 2014.

Who is Russell Wilson?

Russell Wilson is an American football quarterback for the Seattle Seahawks of the National Football League (NFL).

Previously, he played college football at the University of Wisconsin during the 2011 season.

The Seahawks selected him as the 12th pick in the third round of the 2012 NFL Draft.

How old is Russell Wilson?

Russell Wilson is 32 years old. He was born in Cincinnati, Ohio on November 29, 1988, as the son of Harrison Benjamin Wilson III, a lawyer, and Tammy Wilson (née Turner), a legal nurse consultant.

Throughout his childhood years, he grew up in  Richmond, Virginia. Additionally, he has an older brother, Harrison IV, and a younger sister, Anna.

He became interested in the world of football since his early life. He is of American nationality. Furthermore, he belongs to a mixed ethnic background of African-American and Native American.

Talking about his education, Wilson attended Collegiate School, a preparatory school in Richmond, Virginia. As a junior in 2005, he threw for 3,287 yards and 40 touchdowns. Similarly, as a senior, he threw for 3,009 yards, 34 touchdowns, and seven interceptions.

Wilson redshirted during the 2007 season at NC State. In 2008. In the 2008 PapaJohns.com Bowl against Rutgers, he threw for 186 yards and a touchdown and rushed for 46 yards before halftime.

On June 27, 2011, Wisconsin head coach Bret Bielema announced that Wilson had committed to Wisconsin for the 2011 season. In December 2011, he was named a third-team All-American by Yahoo! Sports. On January 28, 2012, he completed his college football career at the 2012 Senior Bowl.

Talking about Russell Wilson’s professional career, On April 27, 2012, Wilson was selected by the Seattle Seahawks in the third round. He made his regular-season debut in a 20–16 loss to the Arizona Cardinals. In his rookie season, he threw for 3,118 yards and 26 touchdowns.

Additionally, he rushed for 489 yards and four touchdowns. Furthermore, he finished his 2013 season with 26 touchdown passes, 9 interceptions, and a 101.2 passer rating.

In the 2014 season, the Seahawks completed their largest postseason comeback in franchise history as they clinched a Super Bowl berth.

Wilson broke numerous Seahawks single-season passing records in the 2015 season. He was ranked 17th on the NFL Top 100 Players of 2016. He started 16 games in the 2016 season. On September 5, 2017, Wilson was voted Seahawks offensive captain for the fifth consecutive season.

Some of the awards and honors that Wilson has received throughout his career are NFL Offensive Rookie of the Month (December 2012), 7× NFC Offensive Player of the Week, PFWA Good Guy Award (2014), and Steve Largent Award (2012) among others.

Furthermore, as per Forbes, he has an estimated net worth of around $42 Million.

Wilson became part of a controversy after rumors surfaced that suggested that there is a feud between the offense and defense of the team, namely between the team’s best defensive players and Russell Wilson.

In March 2015, he was rumored to be dating model Samantha Hoopes when she was spotted in his convertible Rolls-Royce car. At present, there are no rumors concerning Wilson and his career.

Talking about Russell Wilson’s body measurement, he has a height of 1.8m. Additionally, he weighs 98 kg. Furthermore, his hair color is black and his eye color is dark brown.

Russell Wilson is active over social media. He has a huge number of followers on social networking sites such as Facebook, Twitter as well as Instagram. He has more than 5.42M followers on Twitter.

Ciara and her husband Russell Wilson welcomed their second child together; The couple revealed they have a baby girl

The “Love Sex Magic” singer Ciara pregnant with her husband Russell Wilson; Flaunts her baby bump in the stunning way